You are at:Home»Main News»Breaking – Military Takes Over, Says Mugabe Is Safe

HARARE – Zimbabwe’s military has announced the takeover of government targeting criminals but assuring the nation that President Robert Mugabe and his family are safe. 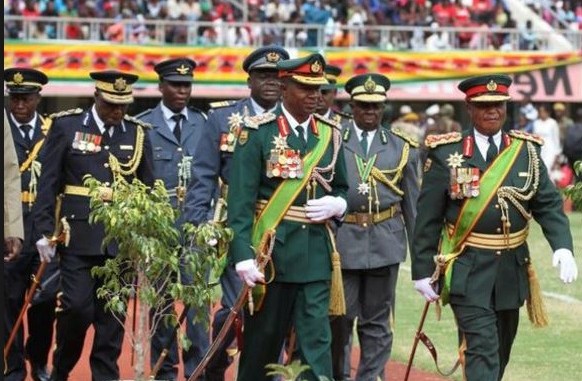 Announcing the takeover of government early in the morning in full military gear, major general Sibusiso Moyo said they are “only targeting criminals” in government.

“Firstly, we wish to assure the nation that His Excellency, the President, of the Republic of Zimbabwe, Head of State and Government and Commander in Chief of the Zimbabwe Defence Forces, Cde R.G Mugabe and his family are safe and sound and their security is guaranteed. We are only targeting criminals around him who are committing crimes that are causing social and economic suffering in the country in order to bring them to justice,” said Moyo.

According to the army, a series of events that started in 2015 has resulted in an economic stagnation and no development due to the infighting in Zanu PF, which army general Constantino Chiwenga said was being caused by “counter revolutionaries”.

“As soon as we have accomplished our mission we expect that the situation will return to normalcy” Moyo said.

Moyo further said “to both our people and the world beyond our borders: We wish to make it abundantly clear that this is not a military takeover of Government. What the Zimbabwe Defence Forces is doing is to pacify a degenerating political, social and economic situation in our country which if not addressed may result in violent conflict”.

He added that the “the generality of the people of Zimbabwe” must “remain calm and limit unnecessary movement” but the army those who are going to work and “with essential business in the city to continue their normal activities as usual. Our wish is that you enjoy your rights and freedoms and that we return our country to a dispensation that allows for investment, development and prosperity that we all fought for and for which many of our citizens paid the supreme sacrifice”.