Zimbabwe’s new administration of President Emmerson Mnangagwa is in a dilemma on how to effectively handle different foreign policy nuances by power houses like America and China. 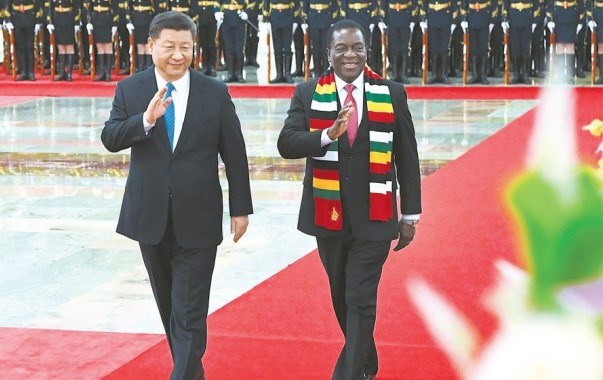 The policy stands by two nations threaten to halt existing deals between China and Zimbabwe.

China, an ally of Zimbabwe during her days under the malaise of economic sanctions imposed by Britain, America and the European Union has extended US$100 million to President Mnangagwa, with another US$1 billion already negotiated for the rehabilitation of the Hwange Thermal power station.

However, investigations by CIJZ reveal that the loans have stringent conditions attached which are in conflict with the interest of America.

The condition deals Mnangagwa’s administration a massive blow to its re-engagement as Anjin Investments’ top diamond buyer Azura Consulting has been slapped with sanctions by the US government.

Documents seen by CIJZ show that Azura consulting participated in Anjin Investment’s diamonds auctions at the peak of its operations between 2010 and 2016.

In an invitation letter addressed to Azura chief Executive officer Eli Avidar Anjin invited the diamond dealers to deposit US$20 million as security for the diamond parcel. Invitation_Letter_anjin(1)

“Please be advised that Anjin is currently selling a large parcel (in excess of 2.5 million carats) with assortments of varying grades. Your company is invited to view the parcel on the condition that you deposit USD$20 MILLION on or before 7 December 2012 into a designated bank account,” reads the letter.

Azura consulting is owned by the Gertler Foundation whose president is an Israeli billionaire Dan Gertler.

In December 2017 the US president Donald Trump launched new sanctions targeting those it described in a statement as “human rights abusers and corrupt actors around the world.”

Included on the list is Israeli billionaire Dan Gertler, recently a senior adviser to the Fleurette Group, which sold its 31% stake in the Democratic Republic Congo’s Mutanda copper mine to Glencore in mid-February 2017.
“The president imposed sanctions on 13 individuals and the Treasury Department’s Office of Foreign Assets Control imposed sanctions on an additional 39 individuals and entities. The sanctions mean that all assets within US jurisdiction of the individuals and entities included, or designated by OFAC, are blocked and US persons are generally prohibited from engaging in transactions with them,” reads the US government statement.

The statement also described Gertler as “an international businessman and billionaire who has amassed his fortune through hundreds of millions of dollars’ worth of opaque and corrupt mining and oil deals in the Democratic Republic of Congo.”

“Treasury alleges that Gertler “used his close friendship with DRC President Joseph Kabila to act as a middleman for mining asset sales in the DRC, requiring some multinational companies to go through Gertler to do business with the Congolese state.” As a result, between 2010 and 2012, the DRC reportedly lost more than $1.36 billion in revenue from the underpricing of mining assets that were sold to offshore companies linked to Gertler.”

Diamonds industry sources in Zimbabwe say it is this relationship between Anjin Investment and the Gertler Foundation that will cause a problem for Mnangagwa.

Seemingly conflicted by different foreign policy nuances by power houses,  Mnangagwa told Zanu PF supporters at a rally in Chegutu on Friday that Zimbabwe has opened up to the international community but ‘we will not forget those who stood by us when we were under sanctions.’

Since assuming office, Mnangagwa’s administration has been pushing for the re-engagement with the Western countries following decades of isolation as a result of sanctions imposed over gross human rights abuses and corruption. Britain is reportedly supporting Mnangagwa’s re-engagement drive.

Anjin is a joint venture between the Anhui Foreign Economic Construction (Group) Co Ltd (Afec), a large construction company which sources say is connected to the military-industrial complex in China, and Matt Bronze Enterprises, which was formed by the Defence ministry and the Zimbabwe Defence Forces through Glass Finish Investments (Pvt) Ltd.

At the peak of diamond mining in Zimbabwe Anjin had a fair share of scandals which include, among others the syphoning of US$255 million from diamond proceeds via BancABC.

Anjin’s subsidiary which handled its investments, SOGECOA Zimbabwe Limited, was used to salt away millions of dollars and has invested in hotels in Zimbabwe, Zambia and Mozambique.