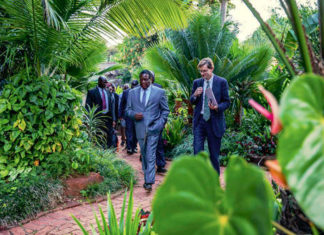 The richest man in Zimbabwe is not Strive Masiyiwa. It is President ED.

He controls the $1,5bn per year fuel industry in Zimbabwe through proxies. Who owns Puma, who owns Zuva? Who controls the fuel pipeline, who is the major indigenous partner? Find out about Trafigura. Why is our fuel coming from Singapore?

Why is there mandatory fuel blending? Find out business relationship between ED and Billy. He runs a monopoly in the fuel business. That’s why he can afford to slash fuel prices to win re-election. Who owns the Chisumbanje plant which is supplying ethanol for blending fuel?

He also owns a bank through Musha… Hebowns gold mines. After staging the coup, the president is rapidly spreading his tentacles to other areas through mukwasha Mlo…. He has bought into Telecel, he is setting up a satellite TV station Dr Dish.

He has covered his tracks through proxies. How did he make all this money? It all started in the DR Congo. All the coup plotters made their money during that military sojourn, operation sovereign legitimacy (osleg).