You are at:Home»Business»Mphoko’s Mayonnaise Sauce Impounded and Given to Hospitals

The goods which were destined for Mphoko’s Choppies supermarkets were reportedly seized by ZIMRA officials after the retail giant failed to pay duty.

Sources at ZIMRA claim that prior to the November 18 coup, the former vice president had not been paying duty for goods destined for his supermarkets across the country.

The sources told New Zimbabwe.com that some of the impounded goods which include Mayonnaise sauce were distributed to Mpilo, Bulawayo United Hospital (UBH) and Ingutsheni Hospital. 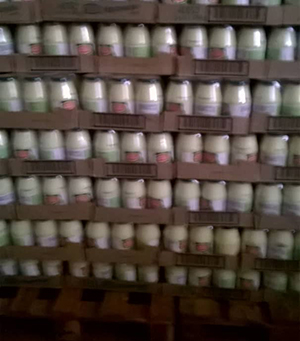 Some of the impounded Choppies goods

“Last week we received more than 50 cartoons of 500 ml of Mayonnaise sauce from the government. The sauce was branded with the Choppies logo,” said a source at Mpilo.

“We have already started serving our patients with the sauce,” said another source at the Hospital.

Mphoko is reportedly currently embroiled in a battle for the control of the supermarket chain with his foreign partners.

He was supposedly drafted into the business in a controversial ploy to comply with Zimbabwe’s indigenisation laws which are now being reviewed by the new administration for the mining sector.

Mphoko was vice president until the November 2017 coup which toppled President Robert Mugabe who had ruled Zimbabwe since independence in 1980.

Mphoko had backed the so-called G40 faction of the ruling Zanu PF party which tried to block then co-deputy president Emmerson Mnangagwa from succeeding the aged Mugabe.

G40 scattered after the military intervened forcing Mugabe to resign with Mnangagwa taking over power.-NewZimbabwe.com