The Zimbabwe Republic Police is attempting to retrieve body of a white man discovered along Victoria Falls gorges with the sub-aqua team expected the lead the process. 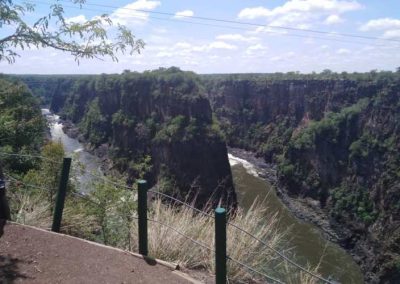 The body was discovered today floating along the Zambezi River less than 400 metres from the Victoria Falls Bridge.

It is alleged that the man whose identity is not yet known, was swimming near the waterfall at a spot referred to as the boiling pot where the river turns and heads down the Batoka Gorge and was swept away by the current.

The ZRP team was at the scene to carry out investigations and to lead the process of retrieving the body.

The gorges and the strong current have made the process of retrieving the body difficult.

The police had to halt the process to allow their sub-aqua team from Bulawayo to come and lead the effort.

It is still not clear at the moment whether the man was a tourist on holiday or a Victoria Falls resident.

Police and other civil protection officials are attending to the scene and the process to retrieve the body is expected to resume upon the arrival of the sub-aqua team.-zbc