For her Broadway debut she’s taken the role in Danai Gurira’s powerful play, Eclipsed, about a group of women (all wives to a rebel general) held captive during Liberia’s second civil war.

Ahead of the play’s opening night Lupita shared this note on her Twitter feed: 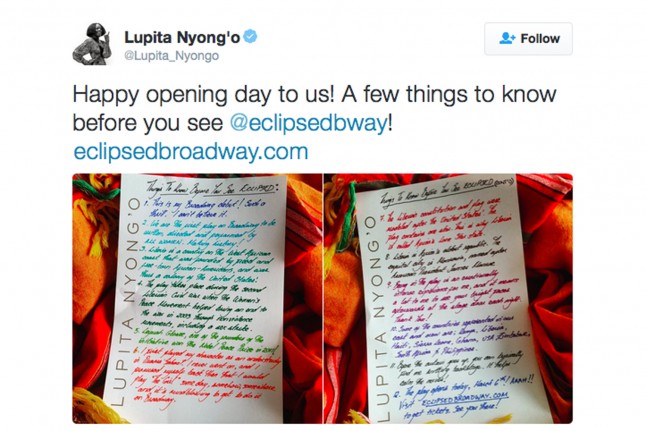 For anyone without supersonic eyesight, Lupita has penned a 12-point list of things she thinks theatre-goers should know before they see the play. It’s a mixture of super informative (packed with facts to help contextualise the material for anyone unfamiliar with Liberia’s history) and personal insights (it’s not the first time Lupita has tackled this role, and she gets crafty backstage to beat nerves).

1. This is my Broadway debut! Such a thrill. I can’t believe it.

2. We are the first play on Broadway to be written, directed and performed by ALL WOMEN. Making history!

3. Liberia is a country on the West African coast that was founded by freed and free-born African-Americans, and was thus a colony of the United States!

4. The play takes place during the second Liberian Civil War when the Women’s Peace Movement helped bring an end to the war in 2003 through nonviolence movements, including a sex strike.

5. Leymah Gbowee, one of the members of the initiative won the Nobel Peace Prize in 2011!

6. I first played my character as an understudy in Drama School. I never went on, and I promised myself back then that I would play “The Girl” some day, somehow, somewhere and it’s mindblowing to get to do it on Broadway.

7. The Liberian constitution and flag were modeled after the United States’. The flag contains one star. This is why Liberia is called Africa’s Lone Star state.

9. Being in the play is an emotionally intense experience for me, and it means a lot to me to see your bright faces afterwards at the stage door each night. Thank you!

10. Some of the countries represented in our cast and show are: Kenya, Liberia, Haiti, Sierra Leone, Ghana, USA, Zimbabwe, South Africa, and Philippines.

11. Before the curtain goes up, you can typically find me knitting backstage. It helps calm the nerves!

12. The play opens today, March 6th! AAAH!! Visit EclipsedBroadway.com to get tickets. See you there!

Now we’re off to go and buy a set of rainbow pens like Lupita’s. Our blue biro suddenly looks so… basic.- marieclaire.co.uk