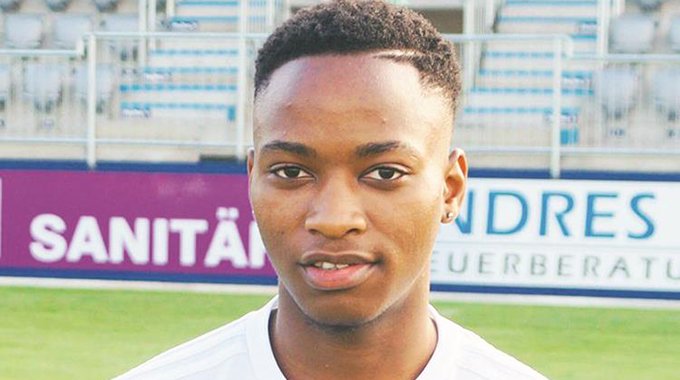 GERMANY-BASED Zimbabwean footballer, Martin Zulu, has been tipped to go places if he gets proper help to reach his full potential.

Zulu, who turns 20 next month, is on the books of German lower division side FC Bayern Alzenau which he joined in July this year. He signed a one-year contract which ends in July, 2020.

It is one of 14 Oberligas, which is the fifth tier of the German football league system.

And, Zulu is attached to FC Bayern Alzenau, a team which he hopes will help him break into the tough German Bundesliga in the future.

Zulu can play either as a winger or midfielder, both offensively or defensively, and he was recently promoted from the FC Bayern Alzenau reserve team to their first team.

According to reports from Germany, this is major step in his quest to turn into a fully-fledged professional footballer in the European country.

And, one of FC Bayern Alzenau’s coaches, Nico Wegmann, yesterday said Zulu can be turned into a brilliant footballer.

“Martin has been playing soccer at FC Bayern Alzenau since about six months ago,’’ he said.

“This is a huge step for young players (like him). The difference between youth soccer and senior soccer is enormous in Germany.

“First, we taught him our mission and values. This will be an ongoing journey for him to be the best possible self.

“Martin is very talented. He is enthusiastic in 1:1, he is very fast and has lots of strength and power. Most impressive is that he is very willing to learn and that he wants to grow continuously.

“Those are very good skills to be successful in soccer in Germany.

“This can take a little while but I am confident that he will make the step. FC Bayern Alzenau and myself are committed to his professional success.’’

Wegmann said if Zulu worked hard, embracing a growth mindset, he could be helped to reach his full potential and sign a professional contract with any top club in Europe.

“I think that there is no recipe to become a professional football player in the (German) Bundesliga,’’ the coach said.

“This depends on so many different factors. Of course, you need some basic talent, you have to be free from bigger injuries and you have to have passion for the game.

“Furthermore, you also need a certain amount of luck and people who support you and your way!

“But, in my opinion, the most important thing is to believe in your dreams, to work in every session as hard as possible and to have the right attitude.

“It’s not the talent which makes you become a professional footballer, it’s the right attitude and the right motivation!

“With the right attitude and passion to football, you will reach all your aims.’’

But what does it take for a player to make it into the German Bundesliga and what exactly is needed from an individual to make the grade in German football?

“This is also a difficult question which can’t be answered generally. (But what is) very important is to have a good fitness, a good tactical understanding and a mental strength.

“Of course, you also need some good technical skills, especially in passing the ball, in taking a good first contact after the pass has reached you and the feeling to move in the right spaces at the right time on the pitch.’’

Zulu is among a number of young Zimbabwean players who have of late found themselves being attached to a number of German lower division sides.

The others are Shama Bako and Seth Patrick, who are both attached to another lower division side, Vfb Lubeck. The Herald