TEN people died while one sustained serious injuries in a head-on collision involving a Chinhoyi-bound Nissan Caravan and a haulage truck at Mapinga along the Harare-Chirundu Highway on Tuesday night. 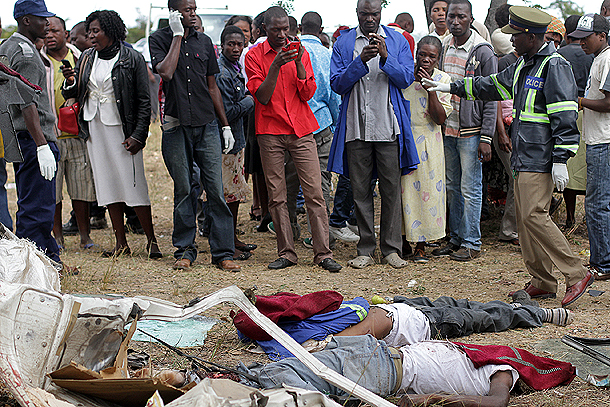 The accident occurred at around 10pm at the 60-kilometre peg where the ascent into the Great Dyke Pass begins.

The driver of the Nissan Caravan allegedly encroached onto the lane of the oncoming haulage truck.

“We announce a very sad development where a fatal road traffic accident occurred at 22:10 hours at the 60km peg along the Harare-Chirundu Road, Mapinga, on 10th July, 2018, where 10 people were killed,” she said. “Circumstances are that a driver of a Nissan Caravan commuter omnibus was driving towards Chinhoyi with 10 passengers on board when he encroached onto the lane of an oncoming haulage truck resulting in a head on collision.”

Snr Asst Comm Charamba said on impact the vehicles veered off the road and fell into a ditch with the haulage truck landing on top of the Nissan Caravan.

“The driver and eight other passengers died on the spot while another passenger in the commuter omnibus died on admission to Banket District Hospital,” she said.

The other passenger, who sustained serious injuries, has been transferred to Parirenyatwa Group of Hospitals.

Among the deceased were family members who were on their way to a funeral at the Kamurosi Family residency in Hunyani suburb of Chinhoyi.

Knowledge Kamurosi, who is a brother to the deceased woman where the mourners were going to pay their last respects, said they received the news of the accident with shock.

“At least seven of the people who died in the accident were relatives coming to my sister’s funeral. We heard they were involved in a head on collision at Mapinga. They were in a private kombi. We do not know what to say faced with such a situation. It is a heavy blow,” he said.