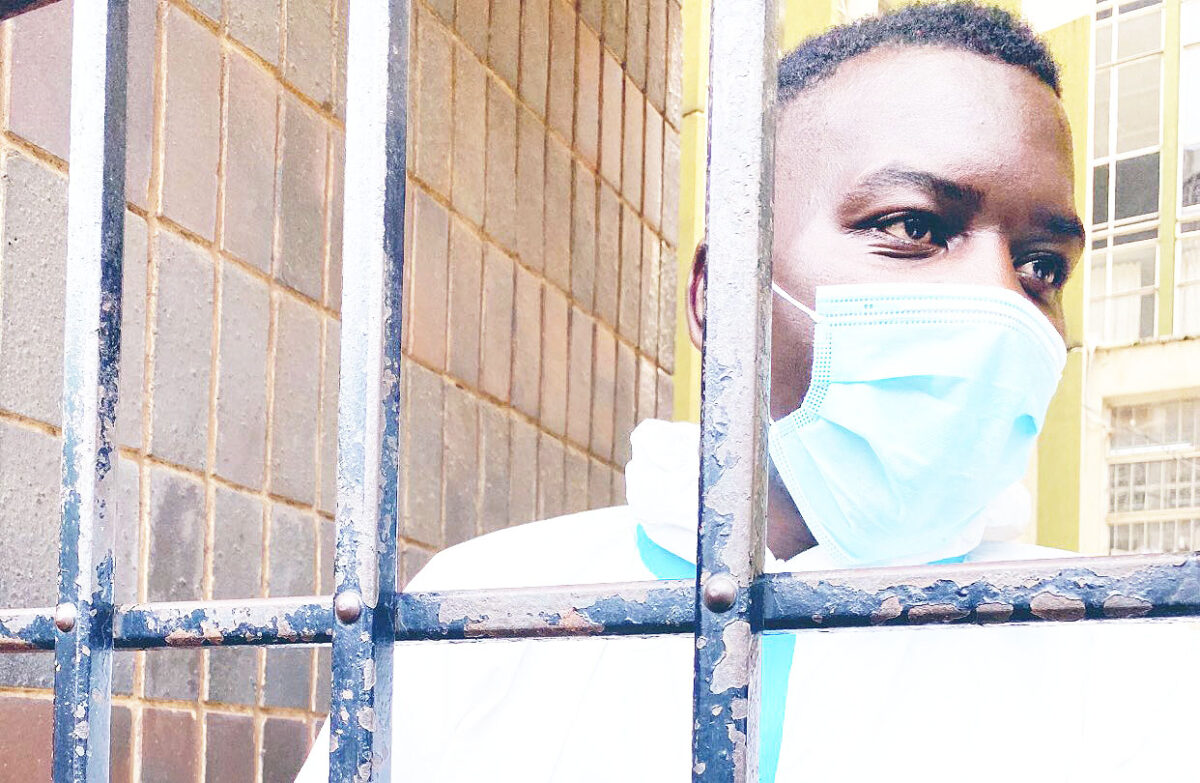 HARARE – Prominent government critic Makomborero Haruzivishe was jailed for an effective 14 months on Tuesday, a week after he was convicted of inciting public violence and resisting arrest.

A journalist was injured outside court as police indiscriminately lashed out at people and disrupted a news conference by a spokesperson for the MDC Alliance.

Harare magistrate Judith Taruvinga jailed Haruzivishe for 24 months on the first count of incitement, and 12 months for resisting arrest.

She suspended 10 of the 24 months, and six of the 12 months. With the two sentences to run concurrently, Haruzivishe will, therefore, serve 14 months in prison.

MDC Alliance vice president Tendai Biti said a “very dark cloud has descended on the motherland” after the sentence was read out.

“Let those whose job and purpose has become one of service to an illegitimate, corrupt, predatory regime know that there will always be a day that the people will hold them to account for their omissions and commissions,” Biti wrote on Twitter.

Prosecutors charged Haruzivishe with two counts of incitement to commit public violence and resisting a peace officer over an incident at the corner of First Street and Nelson Mandela on February 5 last year.

On the incitement charge, it was alleged that four uniformed police officers were “arresting some vendors sprouting in the CBD… which did not go well with Haruzivishe who started mobilising members of the public by whistling a whistle code trying to canvas them to revolt against the police officers.”

Haruzivishe, it was further alleged, “went on to throw some stones towards the police officers and their vehicle.”

On the second count, it was alleged that Haruzivishe “resisted” arrest by a police officer identified as Constable Rayson Davison.

“He became violent and vicious shouting on top of his voice saying in Shona, ‘Munotisungirei? Munota kutiwachisa chete’ (Why are you arresting us? You just want to fix us). He was later on overpowered by the police officers and was arrested,” the National Prosecuting Authority charged.

Police officers had to physically carry Haruzivishe onto their truck as he resisted arrest, the trial heard.

Haruzivishe denied both charges, telling his trial that he was coming out of a Chicken Inn fast-food outlet at about 10.30AM when he saw police officers arresting vendors. He said a police officer who knew him approached and said “we know you MDC people, you’re a problem” before snatching his phone.

He testified that when he shouted at the police officer to return his phone, while following him, he was surrounded by other police officers and arrested.

Haruzivishe’s lawyer Kossam Ncube had pleaded for a non-custodial sentence during mitigation, pointing out that the 29-year-old has no previous conviction.

Taruvinga, however, said a custodial sentence was unavoidable for the incitement charge, even as she conceded that Haruzivishe did not participate in the violence.

Journalism not a crime … Samuel Takawira of 263Chat shows off his injuries after being struck by a policeman’s truncheon
Meanwhile, a journalist was injured outside court when police indiscriminately beat up people with truncheons as they feared anti-government protests.

Samuel Takawira of 263Chat was left nursing a deep cut on top of his hand.

Police also disrupted a news conference by MDC Alliance spokesperson Fadzayi Mahere, amid claims that she was fondled by one of the male officers in the chaotic scenes.

Zimbabwe to Buy One Million Covid-19 Vaccines Each Month