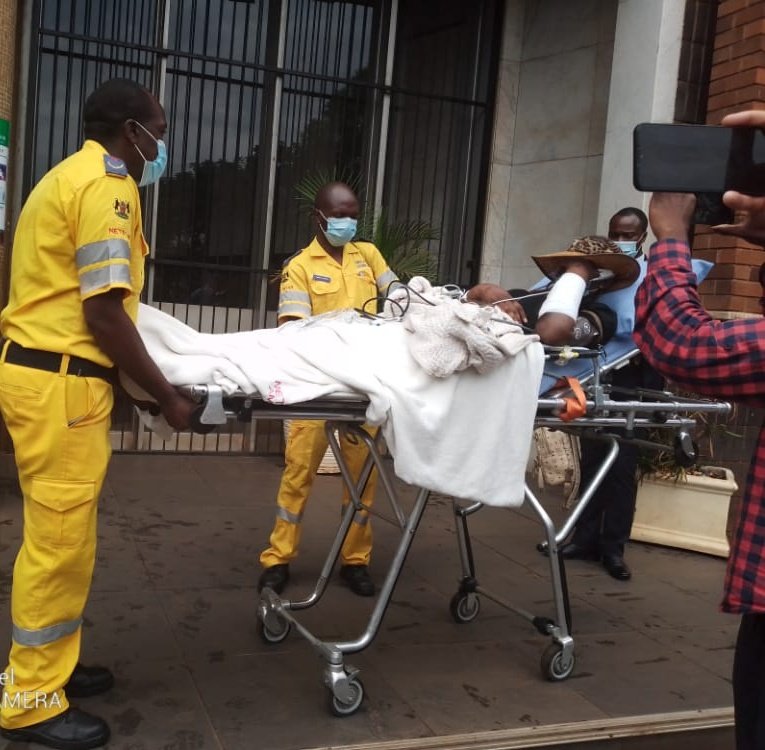 HARARE – Marry Chiwenga has been hospitalised just as her divorce battle with Vice President Constantino Chiwenga is set to get underway at the High Court on Tuesday.

The 39-year-old was due to appear at the Harare Magistrates Court on Monday, but her lawyers said she was admitted at the Health Point Hospital in Belgravia.

“She was further remanded to June 29 for her pending criminal cases,” her lawyer Beatrice Mtetwa told ZimLive.

The former model faces charges of money laundering, fraud and the attempted murder of her husband while he was hospitalised in a South African hospital in July 2019. She denies the charges and instead accuses Chiwenga of fabricating the allegations in order to gain an upper hand in their pending divorce.

The High Court has set Tuesday, Wednesday and Thursday as the dates for the Chiwenga divorce hearings before Justice Esther Muremba.

Chiwenga, who married Marry in 2011, filed for divorce after recovering from a life-threatening illness in 2019.

The Vice President claimed his wife – with whom he has three children – had become a drug addict. He grabbed their children, evicted her from the matrimonial home and got her arrested for attempted murder.

Marry, the daughter of former Dynamos chairman Kenny Mubaiwa, has responded to Chiwenga’s divorce summons and accused him of approaching the court with dirty hands.

She refuted his claims that their customary marriage was dissolved, insisting that she is yet to get a divorce token from him.

Her lawyers said: “Save to admit that the parties married each other under customary law in July 2011 when the parties commenced living together as husband and wife, defendant denies that the customary law marriage was terminated.

“In particular, she denies that the plaintiff (Chiwenga) gave her the divorce token of gupuro and plaintiff is put to the strict proof of his claims.”

As part of the divorce settlement, she is demanding US$40,000 for her monthly upkeep until she dies or remarries and US$2,500 per child for a total of US$7,500 for the trio.

Marry also says in court papers that Chiwenga had created a family Trust called Chawasarira Family Trust. She is asking the High Court that all assets belonging to or registered in the name of Chiwenga as at June 5, 2014, and thereafter accrued to the Trust be distributed to the beneficiaries in terms of provisions of the Deed of Trust.

She also claims that Chiwenga “has already purported to award himself custody of the children and is in contempt of the law.”

“He has come to court with dirty hands and ought not to be heard until he has purged his various contempts,” her lawyers argue.

Marry insists that she is the lawful custodian of the children and until Chiwenga restores custody to her in terms of the law, he is in contempt.

She also argues that several luxury vehicles she is being denied access to were not acquired by Chiwenga.

Marry says they were advised by their bank not to register assets in their names due to “sanctions”, and Chiwenga had “produced his relatives to assist in the acquisition of assets” which he was now excluding from the matrimonial property.

“Defendant further pleads that all monies used to acquire assets were availed by Chiwenga from some of his business partners and that the amnesia he has developed is part of the contrived criminal proceedings against her,” Marry’s lawyers charge.

She also denies that Chiwenga is the owner of their matrimonial home in Borrowdale.

“Defendant pleads that the said property became an asset of the family trust in June 2014 and that she and all the other beneficiaries of the Trust have unfettered rights to occupy and enjoy all benefits accruing from the property,” she argues.

She denied being a drug addict and maintains that it is far better for her to take care of the children because Chiwenga “is more in hospital than out.”

Turning to her monthly expenses, Marry wants the children aged eight, seven and five to be awarded the equivalent of US$2,500 per month each until they reach 18 years.

Chiwenga must also pay the children’s school fees up to university, as well as fund at least three annual holidays.

Mubaiwa wants Chiwenga to provide casual clothing for the children twice per year in June and December. He would also be responsible for each child’s medical expenses.

Marry also wants the High Court to order Chiwenga to pay for her reconstructive surgery and all other medical costs arising from injuries she suffered from a bomb blast in Bulawayo in June 2018 whilst attending a rally with Chiwenga.

Her lawyers also want Chiwenga to be forced to guarantee her an internationally recognised medical aid cover until her death.

Turning to their property, Mubaiwa pleads that all assets held in the names of companies in which each party is a shareholder she should retain her shareholding in each such company with the Chiwenga’s shareholding being declared as an asset of the Chawasarira Trust.

She wants all the vehicles she used during their marriage to be declared to her, as well as a declaration that 50 percent of all funds held in Chiwenga’s name in banks or other financial institutions are hers.