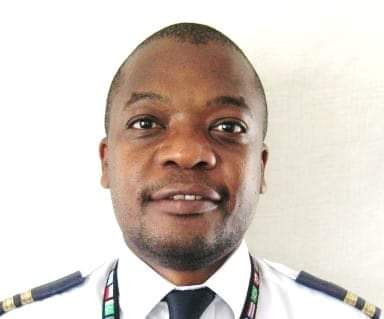 An Air Zimbabwe pilot captain Kevin Chituku has died under mysterious circumstances, barely 48 hours after the death of two experienced Air Force of Zimbabwe (AFZ) pilots and a technician in a helicopter crash in Goromonzi.

Captain Chituku died while alone at his flat in Highlands, Harare this Sunday late afternoon.

His death was announced by Reverend Dr. Lungile Mpetsheni Rhadebe, who is the General Secretary of the Uniting Presbyterian Church in Southern Africa (UPCSA).

Kevin’s sister, Lydia Chituku-Neshangwe, who is also a Reverend with a Presbyterian church, also confirmed the death of her pilot brother. She said in a statement:

My brother, Kevin. You used to depart and still land back home. This time you’ve departed, never to come back. May your soul rest in peace. You will always be loved.

Zimbabwe Voice quoted sources as saying nothing much was known as the deceased young pilot was alone. A family member said:

Only after the postmortem is conducted will the picture get clearer. Otherwise, we’re all in the dark despite being close family members with our dear departed.

In a message to the church’s members, which the Zimbabwe Voice is in possession of, Dr. Rhadebe consoled the Chituku family and called on members to join in praying for the family. The statement read:

It is with a heavy heart and sadness to inform you that Rev Lydia Neshangwe has lost her brother Kevin Chituku. He was found dead in his house in Highlands, Harare, Zimbabwe this afternoon. May his soul rest in eternal peace. Further details of the will be communicated as they become available.

Let us uphold the Neshangwe and Chituku families in our prayers during this difficult time. Rev Lydia Neshangwe is a minister to St Andrew’s Presbyterian, Hillside, Bulawayo within the Presbytery of Zimbabwe. She is the chaplain of the Moderator of the UPCSA General Assembly.

She is also the Moderator of the Council for World Mission.