Zimbabwe has seen a significant rise in deaths of people living with albinism because of skin cancer, as many are unable to afford sunscreens. 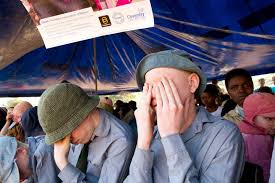 The Zimbabwe Albino Association (Zimas) has recorded at least 17 deaths of its members from skin cancer in four months.

With little or no melanin — the pigment that colours eyes, hair and skin, and protects the body from the harmful effects of the sun — most people living with albinism in Zimbabwe are greatly affected by the country’s high temperatures.

“From January to April, we recorded 17 deaths due to skin cancer, and these are just the people we have in our system. What of those we do not?” Zimas director Mercy Maunganidze-Chimhanga told the Daily News.

“The sunscreen lotions are very expensive, but these are the essential everyday needs of people living with albinism.

“Due to lack of them, a lot of people are dying of skin cancer because of exposure to the sun. And the creams are getting more and more expensive now.”

Maunganidze-Chimhanga said every month, people with albinism spend around $40 on sunscreen lotions, which is a top-line ripple for many.

“The cheapest sunscreen cream is about $8 for a 125ml bottle, and for a person like me, I use four to five bottles a month. But how many people living with albinism can afford this?

“And many of these do not have strong family support systems because of the superstitions around albinism.

“These creams can only be accessed at pharmacies and you know that cancer treatment is a challenge in Zimbabwe. If you go to Parirenyatwa B1 and A6 wards, you will see that about three people admitted there are people with albinism.”

Some of them in Zimbabwe rely on donations from overseas charities to get hold of sunscreen, but more must be done within the country to improve awareness about albinism, activists say.

“For a long time the government had failed to realise  that albinism was a disability and it is  only recently that sunscreens were added to the essential drug list, but this is just on paper because when you go to the health centres or pharmacies you will not find them.

“If you are importing, then you will have to pay duty, making it more expensive,” Maunganidze-Chimhanga added.

Zimas has a registered membership of approximately 13 000. According to national statistics, there are about 70 000 people living with albinism in Zimbabwe.-DN

THE late former president Robert Mugabe’s business empire has crumpled amid revelations that Gushungo Dairy Estate is being leased to a company linked to a millionaire businessman. A once thriving chicken and pig enterprise at […]