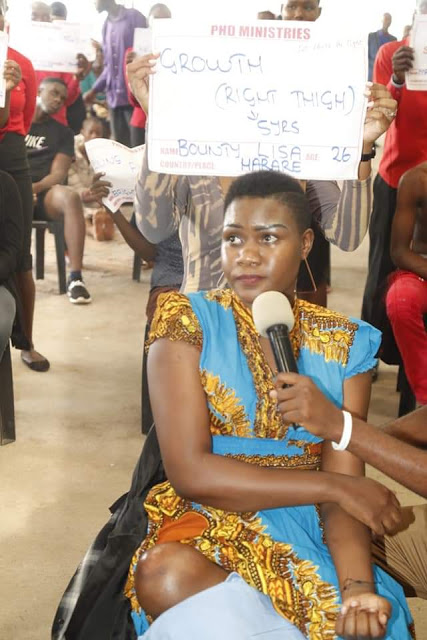 In undated photographs making rounds on social media, Bounty Lisa real name Lisa Musenyi is seen waiting in the prayer line at one of the church services waiting or her turn for the prophet to lay his hands on her.

According to a placard disclosing her ailment, the 26-year-old developed the growth on her right thigh 5 years ago.

Ironically, her now estranged husband Souljah Luv in 2016 made headlines after allegedly getting cured of diabetes after getting ‘healing touch’ from the controversial prophet.

Prophet Magaya who is not new to controversy last year had his ‘healing powers’ questioned after having come under fire  at Parirenyatwa for making alleged claims that he healed a cancer patient with a severe scalp.

The hospital issued a very rare statement saying that Magaya was not responsibleAdvertisementfor removing the tumour following media reports after Magaya’s PHD Ministries released a video, seemingly claiming the credit.

Peter Manganda (43) who had the tumour subsequently gave this statement:

“As people who had lost hope, after failing to get help from Parirenyatwa Hospital, we visited PHD on three occasions on April 17, 19 and 21. We managed to see Prophet Magaya on the third day and that’s when he prayed for my brother.

We received a call from Parirenyatwa Hospital on the April 19 to come for the operation. He was admitted from 22 to 26 April 2019 when the operation was successfully conducted.

I can confirm that we only received prayers at PHD, but the operation was conducted successfully at Parirenyatwa Hospital.

We passed through PHD when my brother was released from hospital on the 8th of June just to say thank you for the prayers, not because the tumour was removed by Prophet Magaya”

Chiwenga Struggles to Walk at Airport-Video