Brentford 2-0 Arsenal: Jubilation for Bees as fans return for victory over Gunners 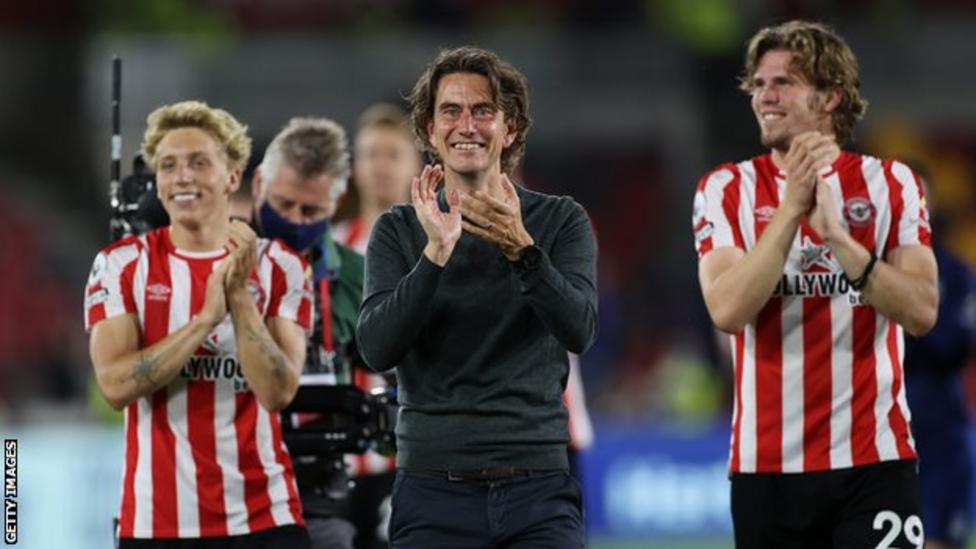 Brentford’s Thomas Frank made his entrance as a Premier League manager with an animated arm-waving plea for noise and support from those inside the vibrant Brentford Community Stadium who had waited so long to savour a night like this.

The charismatic Dane, a cult figure loved by Brentford fans after ending their 74-year wait for top-tier status, need not have bothered.

Brentford’s followers needed no encouragement or orchestration to lift the decibel levels to deafening on a memorable, emotional occasion for a great old club and its fiercely loyal and fervent fanbase.

Relive Brentford’s victory over Arsenal in season opener
Brilliant Brentford stun Arsenal in front of jubilant home crowd
The stage was set hours before kick-off as fans, finally allowed to fill this modern stadium to a 16,479 capacity, gathered around Kew Bridge Station and Chiswick roundabout with a sense of anticipation that was almost tangible.

And expectations were fulfilled in 90 minutes Brentford fans will never forget, ending with the chant of “we’re top of the league” (which of course, they are) after a fully merited 2-0 win over Arsenal.

Arsenal, remember, was a club that felt it deserved a place in the ill-fated European Super League not so long ago and yet here found themselves taken to the cleaners by the supposed underdogs in a chastening night for manager Mikel Arteta and his players.

“We’re just a bus stop in Hounslow” is a self-deprecating chant Brentford’s fans aim at themselves. Not any more. Not with a team that produced this level of performance on the global stage provided by the Premier League.

Brentford will have captured the attention of viewers around the world. It was a performance to make people sit up and take notice.

Frank picked up on the theme and the song as he said: “We’re just a bus stop in Hounslow. We’re not supposed to be here. We will celebrate every win but we want more.

“I think the players were amazing. They ran themselves into the ground, played with intensity. They were brave and pressed high constantly.

Brentford celebrate
Brentford are top of the English top flight for the first time since September 1, 1946
There may well be a tendency to patronise Brentford with a pat on the head as they embark on their time in the Premier League. This does Frank, his players and those who run the club so superbly a grave disservice.

Brentford only missed out on the top flight after losing the 2020 Championship play-off final to Fulham at Wembley and it was testimony to the club’s core strengths that they regrouped to win promotion last season despite selling arguably their two best players in Said Benrahma and Ollie Watkins.

The club is not some sort of happy accident. It is built on planning and strategy so this is a day Brentford will have prepared for – and what a reward it brought them.

It was reflected in a pulsating performance that made a statement about the Bees, suggesting they will not be left wondering no matter what the Premier League fates have in store for them over the next nine months.

And there were familiar faces here to watch in the shape of England manager Gareth Southgate and more significantly Aston Villa manager Dean Smith, who played his part in developing Brentford during his time in charge, with Frank on his staff, and who will face his old team in the Premier League later in August.

Frank delivered a rallying speech via the big screen before the game but such was the noise and atmosphere inside this superbly appointed stadium that few people actually heard his words.

Inspired by the electric atmosphere, Brentford showed their awareness and ruthlessness by probing Arsenal’s flaws (many of them, admittedly) and exposing the physical weaknesses with long throws, one of which led to Christian Norgaard’s decisive second goal.

Indeed, such is the air of suspicion that surrounds Arsenal’s stomach for a fight these days that the fact they lost, and the manner of the defeat, will not be considered a huge surprise.

Brentford’s confidence was sky high as Arsenal’s fell off a cliff, summed up by several seconds of fancy footwork from defender Ethan Pinnock in the second half that sent the stadium into raptures and had Frank turning to the stands demanding, and getting, a standing ovation.

And what scenes greeted the final whistle, as Frank and his Brentford victors did a lap of honour, the manager doing the politician’s pose for pictures with young fans and his players following suit.

Every Brentford face was wreathed in smiles. Some fans even looked close to tears. It was that sort of night, built on anticipation, emotion and elation after the years of waiting and the pain of previous disappointments in the chase for that golden Premier League place.

Frank had every right to his celebrations. He is smart enough to know there will be storms for Brentford to ride this season, so who can seriously begrudge anyone involved with the Bees a second of their joy on a night that will take its place in the club’s history?-BBC