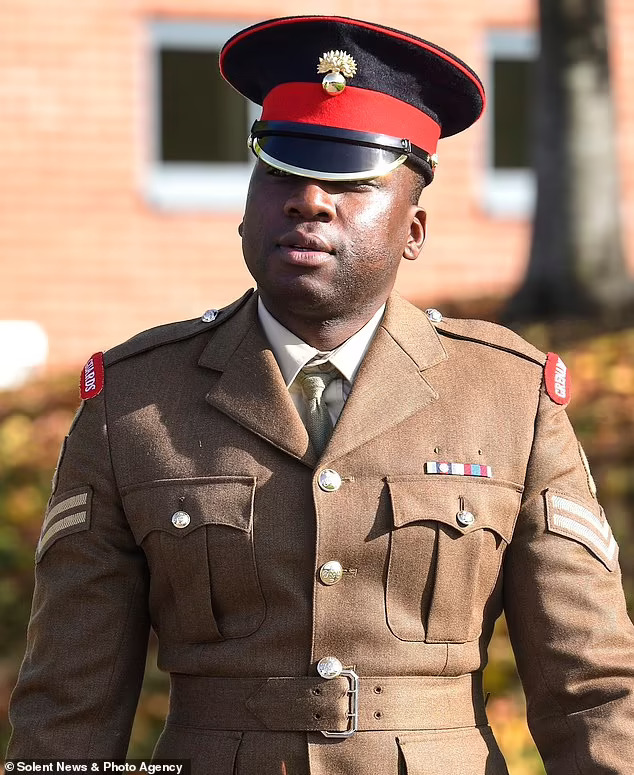 A Grenadier Guard who missed his shift protecting Buckingham Palace after drinking too much rum and falling asleep on the floor has been fined two weeks’ wages, a court martial heard.

Lance Sergeant Farai Mabasa was meant to be on duty from 2am on August 12 but made the ‘very bad decision’ to have a drink with a colleague in his barracks.

The soldier he was meant to be relieving on the Queen’s Guard shift repeatedly rang the 36-year-old to try and find him but he had fallen asleep and missed the shift.

Eventually, Lance Sergeant Mabasa, of the Nijmegen Company Grenadier Guards, was found passed out on another guardsman’s floor at nearby Wellington Barracks.

When ordered to return to the palace later that morning, he turned up smelling of alcohol, the court martial was told.

The Lance Sergeant initially pleaded guilty to two charges of unfitness through alcohol and failure to attend for duty.

He was demoted in rank and sentenced to seven days’ detention through an internal disciplinary procedure.

But according to Army rules, under that process a person with the rank of Lance Sergeant cannot be ordered to be detained without special permission.

This permission was never sought and so the original punishment was quashed at an appeal hearing at Bulford Military Court, Wiltshire.

The court heard the incident took place on August 12 while the late Queen was on her summer holiday in Balmoral.

Lance Sergeant Mabasa, of the Nijmegen Company Grenadier Guards, failed to turn up for a shift at Buckingham Palace in August

Flight Lieutenant Charlotte Adams, prosecuting, said Lance Sergeant Mabasa had finished a shift at Buckingham Palace at 10pm and was due to return at 2am.

She said: ‘[His colleague] checked on his room and the guardroom but [Lance Sergeant Mabasa] was not there. He tried calling him every five minutes but he didn’t answer his phone.

‘Instead [the colleague] stayed on guard for the remainder of the shift. Lance Sergeant Mabasa was found asleep on the floor – he had been out drinking.

‘He was ordered to report back to Buckingham Palace at 8.30am, where he stumbled into the guardroom smelling of alcohol. He was deemed unfit for duty and sent back to Wellington Barracks.’

She continued: ‘The aggravating feature here is that Lance Sergeant Mabasa is an experienced serviceman and should have known the implications of being under the influence during the course of duty.’

Alex Rynn, defending, said Mabasa had been using alcohol as ‘a crutch’ but since the incident, he had started attending Alcoholics Anonymous three times a week and accepted the ‘destructive influence’ it had.

Mr Rynn said: ‘[Lance Sergeant Mabasa] is deeply ashamed – he knows he has done wrong and is rightly being punished.

‘He was drinking rum and fell asleep, that’s why he didn’t answer his phone.’

Lance Sergeant Mabasa was initially demoted in rank and sentenced to seven days detention but this punishment was quashed on a technicality at an appeal hearing at Bulford Military Court, Wiltshire (pictured)

Judge Advocate General Darren Reed told Lance Sergeant Mabasa: ‘We deem this to be serious considering the rank you held at the time. Your unfitness for duty is equally serious.

‘We see this as a wilful disregard for your duty – you rendered yourself unable to perform.’

Referring to the initial demotion and week-long detention, he added: ‘You cannot be detained because of your rank.

‘Consequently we quash that sentence, you will be fined 14 days’ pay, approximately £1,365.’