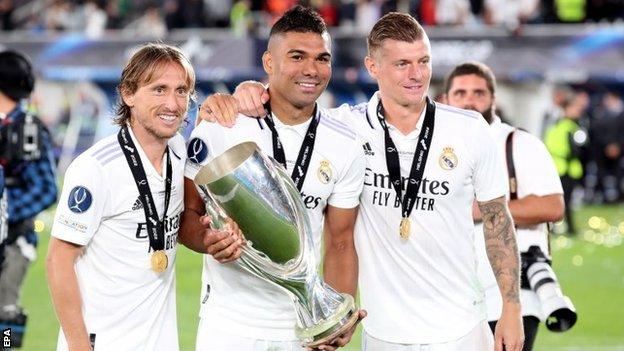 Will the signing of Casemiro prove to be a stroke of genius for Manchester United – or yet another expensive mistake?

It’s said that Hollywood director Cecil B DeMille could find nobodies and turn them into stars. Manchester United have spent much of their time since the departure of Sir Alex Ferguson, some nine years and six full-time managers ago, buying stars and turning them into less than they were.

Whether or not the 30-year-old defensive midfielder, who has won five Champions League titles, ends up being a superstar or superflop, the only certain thing is that he will cost the club a lot of money.

By paying him £350,000 a week, United could almost double his Real Madrid wages, making him the club’s third-highest earner, after Cristiano Ronaldo and David de Gea.

But will it be money well spent?

Who is Casemiro and what have Man Utd seen in him?

Real Madrid manager Carlo Ancelotti has described his trio of Casemiro, Toni Kroos and Luka Modric as the ‘Bermuda Triangle’ of football – where the ball would go and seemingly disappear.

That set-up reinforced Casemiro’s value but just as importantly disguised his limitations.

Casemiro has always felt more comfortable defending near his box and has been crucial covering his team-mates. But he never overcomplicated things – the result of his inability to launch powerful runs and a lack of dribbling ability. A simple ball to Modric or Kroos has always been the perfect solution.

Ancelotti understood, just as Zinedine Zidane did before him, that the lack of dynamism of their partnership required their teams to defend deep and only pressure high every now and again.

Real Madrid paid 7m euros to bring a young Casemiro back from a loan spell at Porto in 2015, under then boss Rafa Benitez, rather than risk losing him to the Portuguese club.

He was hard working, keen to learn and humble, but president Florentino Perez wanted a midfield comprising Kroos and James Rodriguez or Isco, which lacked equilibrium and defensive awareness. While the unglamorous Casemiro added some of that balance, he was also prone to mistakes.

In the end Benitez departed and, after two months in the wilderness under Zidane, defeat against Atletico Madrid persuaded the French coach of what Benitez could have told him all along – that Casemiro was needed to cover the club’s defensive limitations.

Eleven appearances in that season’s Champions League culminated in the final against Atletico Madrid where he played the full 120 minutes, as Real Madrid won their 11th title in a penalty shootout after a 1-1 draw.

And the rest is history.

How will he fit in at Manchester United

If Erik ten Hag is to remain faithful to his high-pressure philosophy, with a high defensive line, then Casemiro’s lack of pace will be exposed.

He lacks the ability to control the spaces behind him, primarily because he is quite slow on the turn. This could prove expensive against teams such as Arsenal and Manchester City, who play a lot of inside passes and find pockets of space.

Madrid’s compact set-up disguised that weakness in Casemiro’s game. With less quality around him in the Brazilian national side, he was less influential. That could be a problem with United when faced with teams that pressure high if he is expected to drive with the ball.

Ancelotti has asked him to go forward more often, occasionally taking on an offensive midfield role, and he scored seven times last season – equalling his career best for a campaign. He will add goals from midfield for United – he has a powerful shot and is a great header of the ball.

He is a leader and a winner who reads the game exceptionally well – and English referees will show more tolerance to his robust approach than he is used to – but it remains difficult seeing how he will fully function in a Ten Hag system.

Despite being the best defensive midfielder in a system that lives on the edge of its own box and attacks as a unit at a slower pace, he will now find himself competing in a league where games are played at a much quicker tempo, and where most teams are faster and stronger than he is used to.

For Ten Hag, it will be a case of finding the right balance to make sure the new arrival fits in as best as possible. To do that, he will have to adapt.

If he decides to play Casemiro in a 4-2-3-1 alongside Fred or Scott McTominay, Ten Hag will have a physical side but one that lacks control. If played next to Christian Eriksen with Bruno Fernandes in front of him, they will have the control but lack of physical presence.

Casemiro will improve the side but it seems unlikely he will make a huge difference to United on his own. As good a defensive midfielder as he is, he is a consistent eight out of 10 player rather than a matchwinner.

What is certain is that they need to improve the quality of their midfield, which is why they should actively carry on with their quest to bring in Frenkie de Jong from Barcelona. Casemiro might not be enough to help them to climb up the table.

At Madrid, Casemiro has won everything. Now he is going to have to compete and get used to his side not having the initiative all the time, get used to defeats and to crisis as Manchester United attempt to find the right path.

But you don’t survive and then ultimately triumph in a bear pit like Real Madrid without being made of the strongest of stuff. Casemiro has the mental fortitude to adapt to whatever might come his way at Old Trafford.

Who will replace him at Real Madrid?

Despite starting the season well, Casemiro has been offering the club less and less over the past year and a half. Maybe that is no surprise; the wear and tear on players in that most taxing defensive midfield role is considerable.

Real Madrid know that, for the time being, David Alaba can easily fit into that role, with Antonio Rudiger stepping in at centre-back.

There are also similarities between the return of Casemiro to Real Madrid at the age of 23 and the purchase of the 22-year-old Aurelien Tchouameni some seven years later for an eye-watering 80m euros, expected to rise rise to around 100m euros.

Those sort of figures suggest Tchouameni was never bought in just to make up the numbers. And despite a poor performance in his league debut at the weekend against Almeria, he is quite clearly one of the best young defensive midfielders in Europe and more than capable of filling the not inconsiderable gap left by Casemiro.-BBC