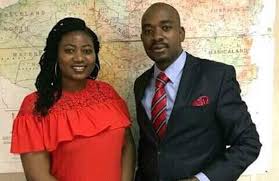 MDC-Alliance leader Mr Nelson Chamisa has come under fire from many social media users after a video went viral of him arbitrarily grabbing a  microphone from his wife, Sithokozile, while she was still delivering a speech during the opposition party’s 20th anniversary celebrations held last weekend.

Mr Chamisa’s wife was making a brief address during the party’s 20th anniversary at Rufaro Stadium before the opposition leader suddenly and without notice grabbed the microphone from her in full public glare before he started bragging that he was the only one who was supposed to make addresses.

“That is enough. No. It is me who has come to make speeches . . .” said Mr Chamisa after taking the microphone from his wife, who was in the middle of her address, thanking founding leader of the party, Mr Morgan Tsvangirai.

The action by Mr Chamisa has received a backlash from social media users most of whom expressing revulsion on the opposition leader’s conduct.

They described Mr Chamisa as someone who lacked respect for women.

Others said the treatment Mr Chamisa gave to his wife was reminiscent to how he treated MDC former vice president Dr Thokozani Khupe, who was assaulted by the party’s youth militia known as the “Vanguard” during the burial of Mr Tsvangirai in Buhera last year, as the battle to control the party was raging on.

Mr Chamisa was accused of condoning the violent conduct after he failed to take disciplinary action against the youths who had the audacity to threaten burning down a thatched hut in which Dr Khupe and other senior party officials had taken refuge in.

Martha Chikata had this to say: “This is deplorable, @nelsonchamisa has no respect for women I said it before and will say it again. Seriously pane vanhu kudaro kuzoti pavari vega #shameful.”

Another social media user, Muguti Eriazer, wrote: “That was bad. We need change in Zimbabwe, but there is something that is just not right about this young man.”

Another social media user said: “Not judging anyone . . . just an honest open discussion . . . What do you think of this, if you do this to me I will embarrass you on that stage.”

Shingirayi Mari also expressed disgust at Mr Chamisa’s conduct. “Snatching a mic like this in front of many people is wrong in all respects”.

Another one identified as Ghetoluv B Ghetoluv wrote: “Honestly it makes many pple wonder what kind of a man he is by his house. He should have asked politely so it doesn’t seem like MDC isn’t organised in terms of giving speeches. And he has to groom his wife in public speaking. So she gets known and help him campaign.”

Star Angel Ngwenya wrote: “Hmmm that was bad indeed he should have let her finish her speech. He should learn from Obama. Michelle would speak until she finished even while her husband was sitting down.”

At one of the MDC congresses, Chamisa said he would donate his wife to Douglas Mwonzora, if he lost the secretary-general’s post to him and went on to lose. Mwonzora did not, however, claim Chamisa’s wife when he won.-Herald