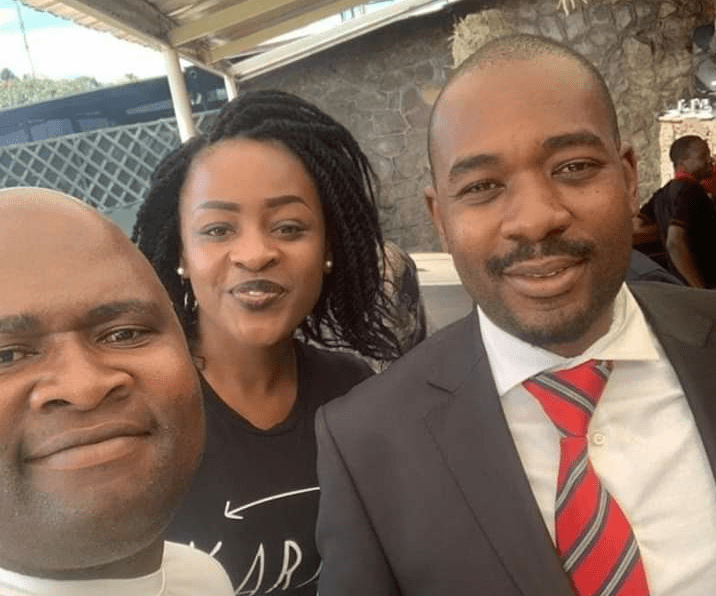 MDC president Nelson Chamisa took the unusual step to answer to online bashers (Varakashi) over claims the MDC leader was having an extra-marital affair with a Harare woman and that a nude video had been leaked by a named female MDC MP.

A ZANU-PF propagandist going by the Facebook name Jones Musara had made the claim on his own Facebook page, attaching a photo of Chamisa with a young woman, forcing Chamisa to respond.

“Chamisa is fixated on (extra-marital affairs) instead of nation building hence he is not Presidential material,” Musara said, attaching a photo.

Nelson Chamisa responded: “Please be truthful. This photo was actually taken at some restaurant on Saturday last week where I was having lunch with the legend Thomas Mapfumo. I also had the pleasure of meeting the young musician Enzo of the Kanjiva fame for the first time.

“I don’t expect such embarrassing lies. I don’t even know that girl whom you unfortunately seek to diminish in standing. I’m not that filthy! Ngativake Zimbabwe nerudo kwete kuiputsa neruvengo!”

Chamisa decried the fact that an innocent woman who only asked for a selfie was having her name soiled all for politics.

“I don’t even know the girl personally,” Chamisa said. “Would it be fair to turn away a fellow zimbabwean who request just a selfie? Kuti takosheiko?”

ZOOMZimbabwe is in possession of a video of the same woman in which she invites men to come get her.

The video, titled “Ndinyengei” (propose to me), has been taken by some as a sign the woman, whose real name is Lorraine Guyo, could be targeting top public officials for fame and relationships.

A person close to Chamisa told ZOOMZimbabwe: “Chamisa must further clear the air that he is not interested in her because we know this girl is searching as she says it in her video titled “ndinyengei”!

“She met him at a public place and asked for a selfie, which Advocate Chamisa agreed to as he takes selfies with hundreds of different people at different places, including ZANU-PF people like Energy Mutodi.

“Just like Mutodi went on to abuse the selfie with Advocate Chamisa at the Oliver Mtukudzi funeral some days ago, this same woman seems to have gone around splashing it on social media with subtle messages like “ndinyengeyi.”.

“We cannot judge her as we do not exactly know the motive, but the fact that she has a video inviting men to come for her made Advocate Chamisa feels he had to clear his name and put varakashi in their rightful place.”

ZOOMZimbabwe has images of the same woman wearing ZANU-PF regalia.

Efforts to reach Lorraine for her comment were not successful at the time of publishing as she repeatedly ignored messages and did not pick up the phone. — ZOOMZimbabwe

Fame And Shame In One Day As Ndinyengeiwo Girl’s Bathroom Video And Pics LEAK!