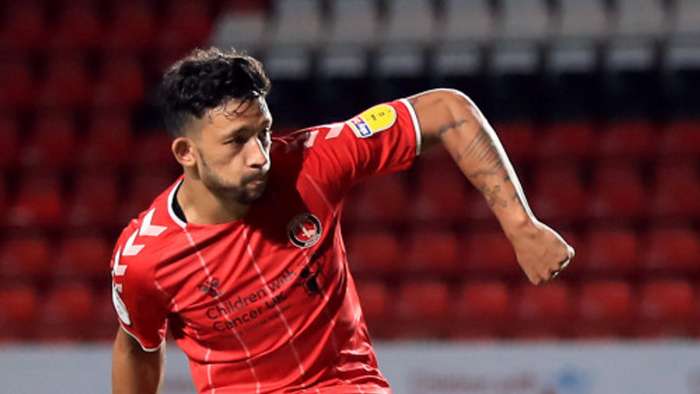 The 24-year-old struck in injury-time to salvage a point for, and keep alive The Addicks’ hopes of Championship survival

Charlton Athletic manager Lee Bowyer has rated Saturday’s 2-2 draw against Wigan Athletic as “the best game… by a country mile” Zimbabwe striker Macauley Bonne has ever played for the club.

Bonne struck two minutes into stoppage time to help Charlton earn a point at home and avoid dropping into the relegation zone.

The south-east Londoners are now just a rung above the relegation zone ahead of their final game of the season, a must-win visit to champions Leeds United on Wednesday.

Before Bonne secured a point for his side to record his 11th Championship goal of the season and his third in the last four matches, Bowyer says he first “had a go” at the Zimbabwe international who joined Charlton at the beginning of this season.

“That was the best game that he’s played for the club by a country mile and it’s not just because he got his goal. Physically he was putting his challenges in and putting his body on the line and that’s part of the game as well,” Bowyer told the Charlton Athletic website.

“I had a go at him maybe a week ago and people may have thought that I was being a bit harsh on him there but that’s my job. To push people.

“And to bring the best out of them and today I said to Macca ‘well done, you were outstanding’ and he could have easily gone the other way about me having a go at him but he didn’t, he stood up like a man and he improved.

“That’s perfect for me. I’m really pleased for him and he deserves all the praise he’ll get after this game.”

Bowyer feels that Bonne’s effectiveness upfront could have earned The Addicks a penalty kick from one of the fouls on the player.

“If you think of the penalties that have been given against us as of late… are you telling me that we shouldn’t have had one,” Bowyer said.

“I’ve looked at them both, both challenges on Macauley Bonne. The first one’s a penalty and the second one isn’t, but again a big decision has gone against us.”

Wednesday’s trip to Leeds United will see Bowyer facing his former club who have already secured a Premier League ticket.