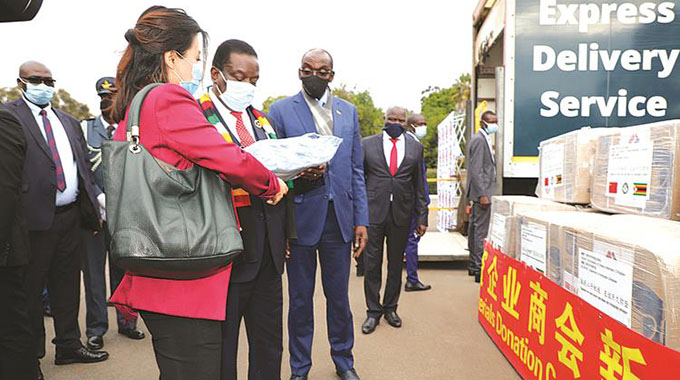 The Chinese national who has been charged with shooting and injuring two people at a mine in Gweru over a salary dispute will receive a fair trial, without discrimination, in accordance with the country’s laws, President Mnangagwa said yesterday.

Speaking at State House when he received donations to fight the Covid-19 pandemic from  the Minerals Marketing Corporation of Zimbabwe (MMCZ) and the Chamber of Chinese Enterprises in Zimbabwe (CCEZ), the President made it clear that the mine manager would be treated the same as every other citizen and resident.

Chinese Ambassador to Zimbabwe, Guo Shaochun, had earlier said the incident did not represent the behaviour of the Chinese community in Zimbabwe.

Zhang Xuelin, a manager at Reden Mine, allegedly shot Mr Kenneth Tachiona (39) on both legs as well as Ms Wendy Chikwaira (30) on the arm after they confronted him over outstanding salaries at the mine last Sunday.

He has since been arrested on attempted murder charges and appeared in the magistrates courts in Gweru where he was remanded in custody to July 7.

“Let me assure you that our laws are not discriminatory; there will be no favour, there will be no discrimination. The law must apply to every citizen and resident in this country equally. So the man involved will not be disadvantaged at all. He will receive a fair trial and fair treatment as any other Zimbabwean would have,” said the President.

Making it clear that Zimbabwe recognised that crimes were committed by individuals not communities, President Mnangagwa said Zimbabweans were mature enough to recognise that a crime by one person did not brand others of the same group.

Ambassador Guo had expressed concern over the incident and reiterated his support for the country’s law enforcement agencies to investigate and handle the matter in a transparent manner as required by the country’s laws.

“I would also like to emphasise that this is an isolated incident, and no matter what had happened to the enterprise before the incident took place, this is not what we want to see. The behaviour of the Chinese employee involved in the case does not represent China, the Chinese Government and all Chinese nationals and Chinese enterprises in Zimbabwe. Any possible illegal acts and persons who violate the law should not be shielded,” he said.

Ambassador Guo said China and Zimbabwe had long-standing friendship and cooperation, and called upon all relevant sides to safeguard the relations carefully.

Meanwhile, CCEZ, which represents a swathe of Chinese-owned companies in Zimbabwe, donated medicines and personal protective equipment to institutions worth US$55 000.

The goods were handed over by the organisation’s vice president, Ms Shanel Liu.

They include US$5 000 worth of medicine to Parirenyatwa Group of Hospitals, 20 000 surgical masks each to Matabeleland South and Midlands provinces and the Zimbabwe Revenue Authority while the Immigration Department got 45 000 masks.

President Mnangagwa thanked the Chinese business community and the mines for their donations that he said had contributed to the country’s improved readiness to handle the Covid-19 pandemic.

He reiterated that Government would ensure fair distribution of the donated goods and had put in place mechanisms to ensure transparency.

The Chinese government and various Chinese groups have made many donations towards the Covid-19 fight while the MMCZ has previously donated US$40 000.-herald