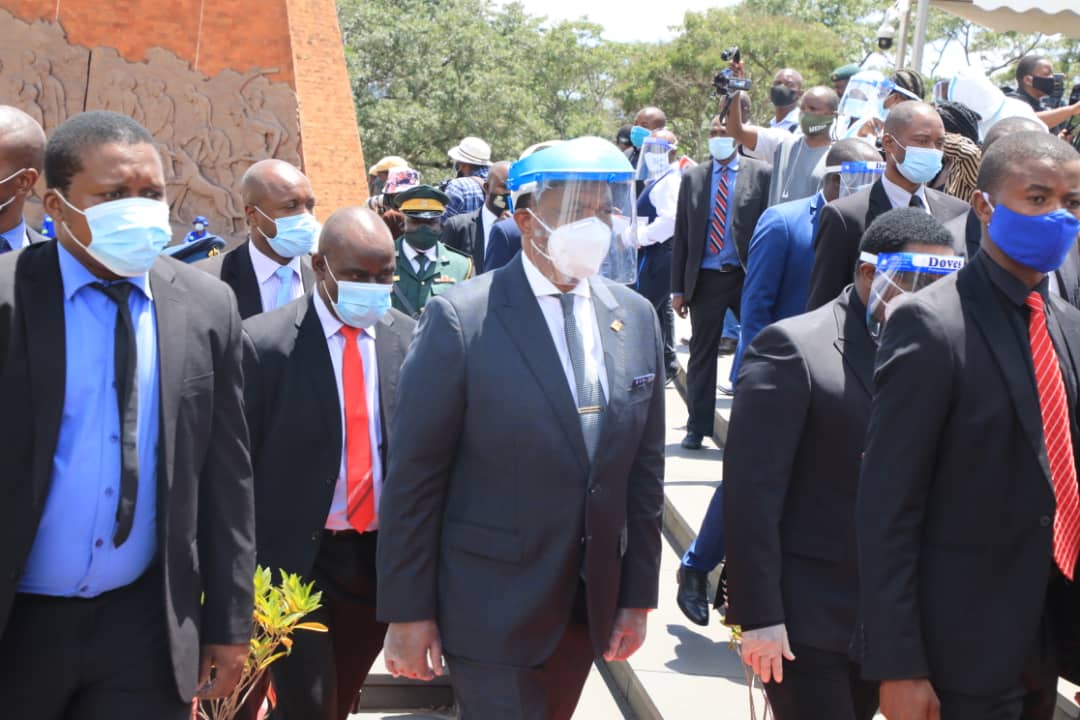 HARARE – Acting President Constantino Chiwenga on Wednesday said only God knows how the coronavirus will end, as he made his first public appearance in a week for the burial of two cabinet ministers and a former prisons boss.

Chiwenga, who had been rumoured to be unwell, betrayed no such signs as he led proceedings at the unprecedented triple burial of foreign minister Sibusiso Moyo, transport minister Joel Biggie Matiza and former prisons chief Paradzai Zimondi at the National Heroes Acre, a hilltop cemetery in Harare.

The three died from Covid-19 which has killed four ministers, three of them in the last fortnight.

“One expects that when tragedy strikes, it would gradually abet but this is not the case, it is only God who knows when it will end,” the 64-year-old former army general said, speaking before a sparse audience of mainly family members of the trio and security officers.

He went on: “Today marks a tragic day for our country Zimbabwe. I want to express my pain over Covid-19.

“The virus has taught us an important lesson that we are all mortals. It does discriminate against the weak and the powerful, the privileged and the deprived, the haves and the have-nots. It is a ruthless juggernaut that leaves a trail of despair and desperation. But we will eventually conquer it and prevail as a people.”

Chiwenga, who doubles up as health minister, said the government “is already in the process of acquiring the necessary vaccines for this pandemic,” but gave no details.

Zimbabwe, a country of 15 million, is reported to be in talks with China and Russia to procure much-needed vaccines. Zimbabwe is also part of COVAX, the global pooled procurement mechanism for Covid-19 vaccines through which it hopes to secure jabs for at least two million of its citizens.

Sombre … Vice President Chiwenga told of his pain as he buried three comrades at the National Heroes Acre on Wednesday
Chiwenga, who took over from Vice President Kembo Mohadi as Acting President for the last 15 days of January, was last week temporarily eased out of the presidency by President Emmerson Mnangagwa, who is on leave, over health concerns.

A spokesman for the presidency said Chiwenga was “worse for wear,” blaming his condition on exhaustion after he apparently worked long hours as Zimbabwe battles a resurgent virus which is killing at a higher rate since the start of the year.

On Tuesday, the ministry of health reported 358 new infections and 28 deaths. Zimbabwe has to date reported 32,004 coronavirus cases which have led to 1,103 deaths.

As of January 25, the country’s hospitals currently were holding 213 patients, of whom 139 were reported to be in mild or moderate condition, 62 severe and 12 were on life support.