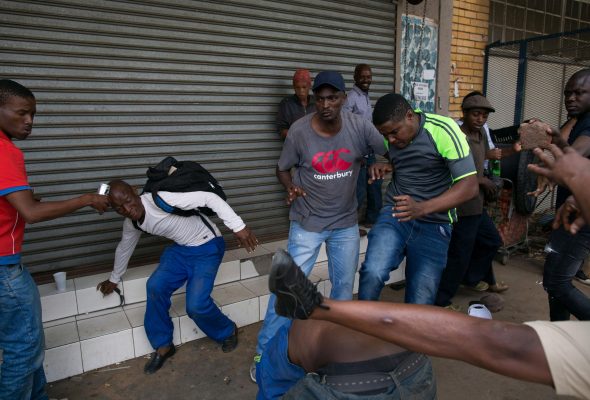 Local clerics have slammed Friday’s xenophobic attacks on Zimbabweans and other foreign nationals in South Africa — demanding that their regional peers must intervene to force President Jacob Zuma’s government to stamp out the violence.

The call comes as President Robert Mugabe’s government is holding crucial talks with their South African counterparts in the wake of the violence.

Pastors under Sam Malunga’s Tehillar Christian Network (TCN) rallied other church leaders in the Sadc region to unite and help put to an end the attacks on foreigners by South Africans.

“Clerics and church leaders under the banner of the Tehillar Christian Network condemn xenophobia in the strongest terms and call on regional and South African churches to take front lines across ethnic cultural and religious divide and expose negative elements in South Africa instigating, perpetuating and fanning xenophobia,” Malunga said in a statement.

“Xenophobia…taints and mars the spirit of cohesion and co-existence among African citizens. Social entities such as artists, musicians, clerics, politicians and community leaders have the moral obligation to expose and condemn the evils of xenophobia and the need to eradicate and exterminate the prevalence of xenophobia.”.

Malunga said the government in South Africa has a moral obligation to investigate perpetrators and instigators of xenophobia.

“They (South African authorities) are dealing with the results, but they have to go down to the sources.

“Church bodies and African heads of denominations are called upon to network and engage all church members to preach against xenophobia, cascading the message to religious adherences and followers,” he added.

Friday’s violence, which occurred mainly around Pretoria, came days after the leader of a fringe new opposition party, South Africa First — Mario Khumalo — had promised to drive out all foreigners and also close South Africa’s borders to outsiders within 48 hours of winning elections.

The barbaric attacks evoked ugly memories of the deadly xenophobic attacks of 2015 which displaced hundreds of thousands of Zimbabweans and other African immigrants living in South Africa, following inflammatory remarks by eccentric Zulu king, Goodwill Zwelithini, who had called for the expulsion of foreigners.

Then, the xenophobic violence only stopped after pictures of a Mozambican immigrant, Emmanuel Sithole — who was bludgeoned to death with knives and a wrench by marauding anti-fellow black thugs — caught the world’s attention when they were released by South Africa’s biggest circulating newspaper, the Sunday Times.

South African police arrested hundreds of people in Friday’s crackdown against the perpetrators of violence which left many Zimbabweans and other foreign nationals fearing a repeat of the horrific scenes of 2015. Daily News