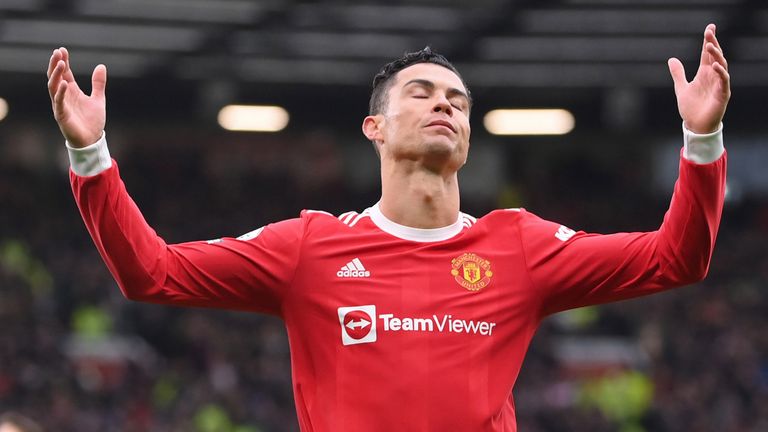 Benni McCarthy is reportedly a popular addition to Erik ten Hag’s coaching staff at Manchester United… with even Cristiano Ronaldo approving his appointment.

McCarthy, 44, was confirmed as United’s new first-team coach last month. The former South Africa international has been coaching for nearly a decade, working at Hibernian before managerial roles in his homeland with Cape Town City and Amazulu.

McCarthy is best known for his glittering playing career, representing Blackburn and West Ham in the Premier League. He was part of Jose Mourinho’s Porto side that unexpectantly won the Champions League in May 2004, defeating Monaco 3-0 in the final.

Barcelona confirm Frenkie de Jong “has offers” amid Man Utd transfer interest
undefined
According to the Daily Mail, McCarthy is a popular addition to United’s coaching staff. The self-confessed Red Devils fan has been holding extra shooting practice sessions at the club’s Carrington training ground after being asked by Bruno Fernandes.

It’s believed these sessions have proved popular and various players – including Ronaldo and Cristian Eriksen – have joined in. Defender Lisandro Martinez has also got in on the fun. McCarthy once scored 18 Premier League goals in a single season at Blackburn.

But McCarthy’s work is yet to make an impact on Ten Hag’s side. United lost 2-1 at home to Brighton on Sunday afternoon, with Alexis Mac Allister’s own goal going down as the first strike of the Ten Hag era. The Dutchman was appointed earlier this summer.

McCarthy always wanted to play for United. Despite never fulfilling that dream, he’s delighted to have an important role at Old Trafford. “I’m just excited and happy to be here,” he told MUTV. “How can you not be when you’re standing in the Theatre of Dreams?”

Explaining McCarthy’s appointment to MUTV, Ten Hag said: “There was still one place in our coaching staff that I wanted to fill. Someone with a different voice and Benni is that one. He has experience as a manager. He was a coach in the professional level and he was a former striker, a really successful striker as well.”

Ten Hag went on to say: “He will focus on the positioning and attacking. I’m not saying only the strikers, but also the integration from the full-backs and midfielders. Our way of play has to be dynamic.”