Members of the Zimbabwe Hospital Doctors Association (ZHDA) have called for Dr P Mugoni to be investigated and disciplined for bringing the name of the organisation into disrepute. This comes after Mugoni cried at a Zanu-PF rally where he allegedly gave his personal opinions as those of the organisation.  The former leaders of the ZHDA insisted that it the organisation was apolitical and should not be involved in politics.

In a statement, the organisation said,

The Council of former NEC members of the Zimbabwe Hospital Doctors Association has noted with great concern the recent developments pertaining to the meddling of ZHDA office bearers in activities of political parties. Specifically, we note the indecorous conduct and utterances made by Dr P Mugoni at a ZANU PFrally in Gweru where he conflated his political opinions and those of all government-employed doctors.

Whilst we acknowledge the said doctor right to freedom of assembly, speech and association we are enraged by the politicization of the ZHDA. The ZHDA is a professional body that represents the interests of all government-employed doctors regardless of political party afﬁliation. We join Zimbabweans across the country who have in their different forums deplored such conduct and strongly encourage the present leadership at the ZHDA to immediately take stern disciplinary measures against Dr P Mugoni.

To restore the confidence of the members of the ZHDA we advise you suspend, investigate and if found guilty discipline Dr P Mugoni for bringing the association name and its entire brand into disrepute. As pastleaders of the ZHDA, we dissociate ourselves from such conduct and advise the current ZHDA to develop a code of conduct that guides the actions of its office bearers and members to avoid a repeat of such episodes in future. ZHDA is founded on firm principles of representation and should at all times remain apolitical!

We will be following up with your esteemed office soon to hear of the latest developments. 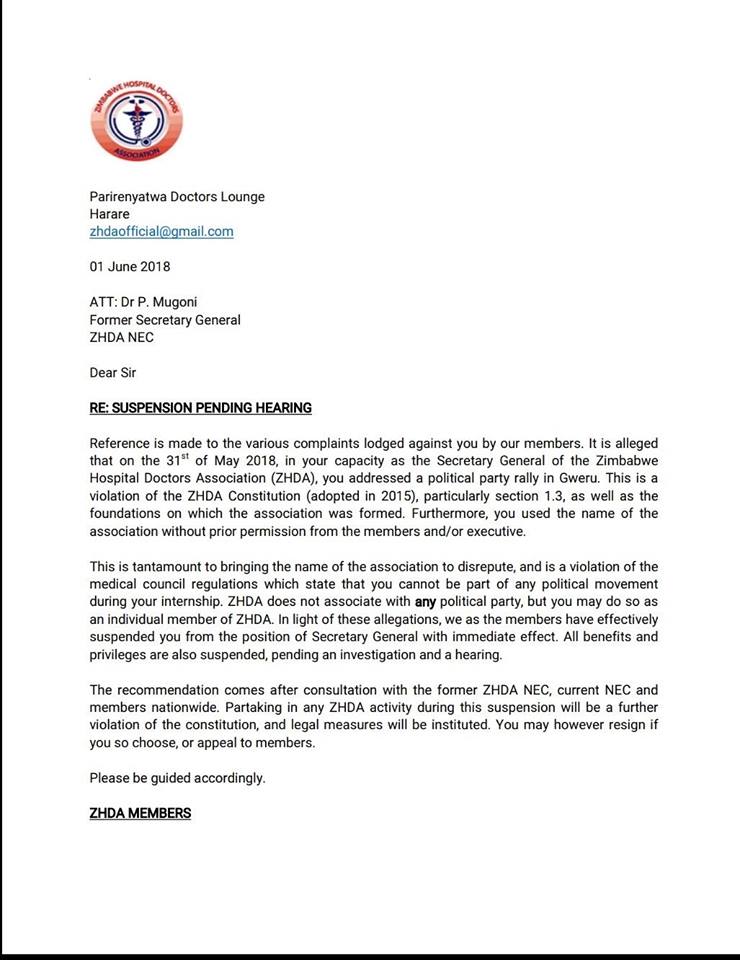