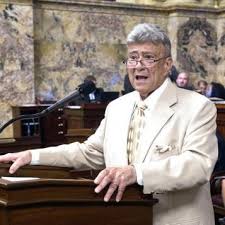 A longtime Pennsylvania state representative was re-elected in a landslide – even though he died last month.

DeLuca, 85, died on 9 October from lymphoma, a disease he had twice previously fended off.

By the time of his death it was too late to change the ballot or put forth another candidate for his seat. While his opponent, Green candidate Queonia “Zarah” Livingston, accounted for more than 14% of the vote, DeLuca’s victory has triggered a special election that will be held on a later date.

“While we’re incredibly saddened by the loss of Representative Tony DeLuca, we are proud to see the voters continue to show their confidence in him and his commitment to Democratic values by re-electing him posthumously,” the Pennsylvania House Democratic campaign committee said in a tweet.

While we’re incredibly saddened by the loss of Representative Tony DeLuca, we are proud to see the voters to continue to show their confidence in him and his commitment to Democratic values by re-electing him posthumously. A special election will follow soon. pic.twitter.com/CfLnSCuvK9

— PA House Dems (@PAHDCC) November 9, 2022
This isn’t the first time a candidate has won an election posthumously. In 2018, brothel owner Dennis Hof won a seat in the Nevada senate as a Republican despite dying the month before. Unlike in Pennsylvania, however, his victory did not trigger a special election: under Nevada state law, county officials could appoint a Republican to take Hof’s place for the entire term.

Some blame low voter awareness of current events – current events such as whether the candidate is alive or not – for why candidates get elected posthumously, while others suggest voters are simply choosing the name they’re most familiar with.

Some folks commenting that the voters here were oblivious. Some certainly were. But for others, they likely preferred the idea of a special election over electing the third-party candidate on the ballot

— Charlie Wolfson (@chwolfson) November 9, 2022
DeLuca represented the 32nd legislative district of Pennsylvania for 39 years, and served as the Democratic chairman of the House insurance committee for the last 20 years. He fought for patients’ rights with insurance companies and to hold medical professionals accountable, becoming an outspoken advocate for cancer awareness and increased funding for local cancer research after his first lymphoma diagnosis and the breast cancer diagnosis of his late wife of 66 years.

He sponsored more than 100 pieces of legislation during the 2021-22 legislative session and voted remotely on bills up to a few days before his death.

DeLuca’s opponent, Livingston, ran on a platform of moving toward a Green New Deal, ending corruption in Harrisburg, criminal justice reform and establishing abortion and reproductive rights. Within days of the election, she was still reminding people on Twitter that she was the only living candidate remaining in the race.

Voting “safe” means because people in my district decided to vote for the guy that is now deceased; to honor his legacy. We now have no one in our district, to represent us at all until the special election is over. I would love for someone to tell me how this is better??