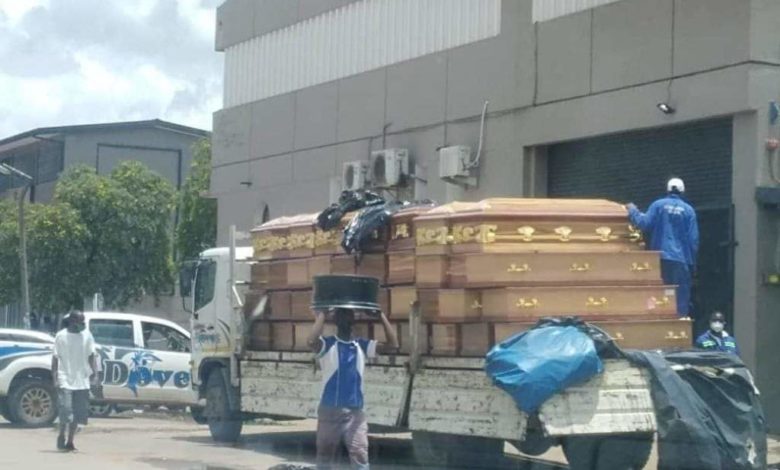 DOVES Funeral Services allegedly stuffed blankets and plastic bags inside the coffin meant to have carried the remains of the late Maxwell Chimwamurombe, in the latest twist to the burial saga of the Nyanga resident who died in March last year.

Fresh details gathered by The Sunday Mail have revealed that Chimwamurombe’s remains were instead buried in Harare, inside the coffin that had the body of a pauper, whose funeral was paid for by the Harare City Council.

Doves had delivered the coffin to the Chimwamurombe family in Nyanga and the family received it in the belief that it contained the remains of their relative.

The Funeral Services Company now faces two accounts of fraud for duping Harare City Council by burying two corpses in the same vault and for failing to offer expected services to the policy holder who was paying her premiums.

According to a leaked police memo seen by The Sunday Mail, Doves later realised the mix-up, but instead of correcting the mistake, the company buried Chimwamurombe’s corpse at Glenview Cemetery under a pauper’s burial.

“I can confirm the authenticity of the internal memo, although it was leaked, it is part of police investigations between Doves and the family of Chimwamurombe,” he said.

According to the memo, detectives from the CID accompanied by chief pathologist Dr Tsungai Victor Javangwe on Friday exhumed the coffin in which Chimwamurombe was purportedly buried and found no body inside.

“The remains were exhumed and taken to Avilla Mission hospital mortuary (in Nyanga) where they were examined by Doctor Javangwe in the presence of all the interested parties. It was discovered that there were no human remains in the coffin. Instead it was discovered that there was a plastic bag with a blanket, another plastic bag with two tent body bags and one with a trousers, shirt and a white cloth which were all wrapped in a blanket.

“Doctor Javangwe, chief pathologist announced that his findings will be highlighted in a report which he will submit to CID Homicide while CID Homicide I.C Crime D/I Tongo stated that the Doves Morgan Funeral policy company will be charged with two counts of Fraud. The first count is that of defrauding the policy holder who was paying her premiums but failed to offer her the expected services. The second count is that of defrauding Harare City council by paying for one grave then later buried two corpses in the same grave.”

Stakeholders in the funeral services and assurance sector said they are studying the case, amid indications that Doves could face further sanctions.

The Insurance and Pensions Commission (IPEC) — a statutory body that regulates, supervises and monitors the sector, said they are ‘seized’ with the matter.

“While IPEC does not regulate funeral services providers such as Doves Funeral Services (Ltd), its interest was drawn by the fact that the matter also involved the insurer, Doves Life Assurance which it regulates,” reads part of IPEC’s communique sent to this publication.

“We are still waiting for an official police communication and we will take it from there,” he said.

Yesterday, efforts to get comment from Chimwamurombe’s family spokesperson Mr Adama Chimwamurombe and another family member Fungai Chimwamurombe hit a brick wall as both mobile number were unreachable.

Maxwell Chimwamurombe drowned in the flooded Nyamombe River in Nyanga last year and his body could not be found for weeks.

When he was discovered, the body had some parts scattered on a riverbank.

The remains were reportedly collected in a plastic bag and then sent to Harare for Doves to prepare for burial.