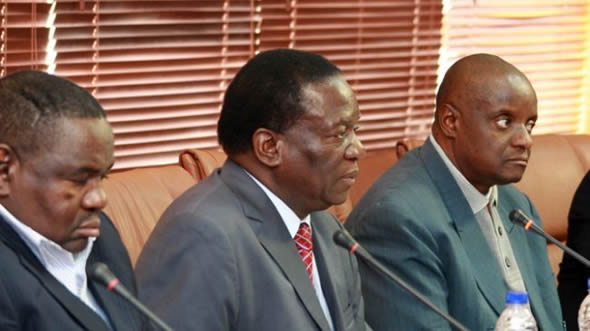 Ncube has all along been perceived as one of Mnangagwas’s allies as he hails from the Midlands province.

In a statement, Chief Secretary to the President and Cabinet Misheck Sibanda said Ncube was fired for conduct not commensurate with his mandate as a government minister.

He, however, did not specify the “inappropriate conduct” which resulted in Ncube being axed from one of the country’s top security posts.

Insiders within the ruling Zanu PF party told NewsDay that Ncube was fired for allegedly refusing to heed Mnangagwa’s directive not to contest in the Zanu PF Midlands provincial elections if he wanted to keep his ministerial post.

They said Mnangagwa imposed Larry Mavhima as the chairperson for the Midlands province after he forced Ncube, who was itching for the top provincial post, to choose between withdrawing from the provincial polls and keeping his ministerial post.

On Saturday during the Zanu PF Midlands provincial co-ordinating committee meeting to introduce the new provincial leaders, Ncube reportedly unleashed violence on the delegates at the meeting.

He is said to have imposed himself as provincial vice-chairperson.

The meeting was later abandoned after some Zanu PF youths, armed with machetes, and allegedly acting under Ncube’s orders started terrorising party members perceived to be against the ousted security minister.

“When Mavhima inquired from him over why he was imposing himself as his deputy chairperson, he (Ncube) openly told him that he had no right to ask him as he had not been voted into office,” a source told NewsDay yesterday.

“He was like a bulldog, barking instructions to other politburo members who were cowed into submission as they thought that he was actually acting under the President’s instructions. The President fired him for that unruly violent behaviour which he exhibited in the province.”

Following the announcement of Ncube’s dismissal, there was jubilation among ruling party members, who posted celebratory messages on social media, applauding Mnangagwa for stamping his authority.

Zanu PF party supporters said Ncube was dividing the party, which has been experiencing factional fights as revealed by chaos witnessed during the just-ended provincial elections, where contestants dropped Mnangagwa and his deputy Constantino Chiwenga’s names to secure victory.

In one audio recording posted in one of the Zanu PF WhatsApp groups, supporters sang: “Mudha waenda nemabara kumusana (Mudha has gone with bullets lodged in his back).”

Ncube’s purge came a few days after independent Norton legislator Temba Mliswa, who has always been at loggerheads with him, took a dig at the former, accusing him of faking support for Mnangagwa.

In a celebratory message which Mliswa posted on Twitter yesterday, he said: “Best move ever! Sources say this letter was handed to him while he was conducting a Central Intelligence Organisation (CIO) directors’ meeting this morning. Hamba! (Go!) I told you we didn’t need this guy, he created too many problems and was a huge liability not only to the party, but to @edmnangagwa too. One can’t just treat people wrongly with impunity. I don’t usually get such infor wrong. People who occupy such positions must be qualified and support the country’s vision; serious people. This isn’t an office to be abused or used to settle personal scores.”

1/ BEST MOVE EVER!! SOURCES SAY THIS LETTER WAS HANDED TO HIM WHILST HE WAS CONDUCTING A CIO DIRECTOR’S MEETING THIS MORNING. HAMBA! I TOLD YOU WE DIDN’T NEED THIS GUY, HE CREATED TOO MANY PROBLEMS AND WAS A HUGE LIABILITY TO NOT ONLY THE PARTY, BUT TO @EDMNANGAGWA TOO PIC.TWITTER.COM/UYTJY19YUL

Ncube was appointed State Security minister in September 2018. Before that, he was Midlands Provincial Affairs minister.

Presidential spokesperson George Charamba refused to comment on the issue.

“I don’t go beyond the President, that’s as far as I go, that which is in the statement,” Charamba said.-Newday