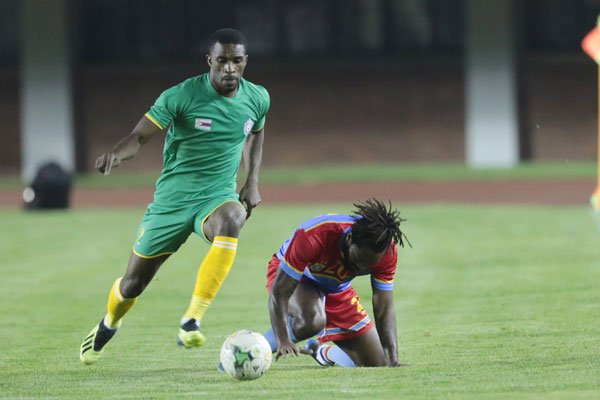 Going for the ball . . .Tendayi Darikwa

The English Championship side, Nottingham Forest man played the match of his life, helping Zimbabwe to the famous victory over the Democratic Republic of Congo (DRC) a week ago and made his home debut in front of a packed National Sports Stadium on Tuesday.

The experience which he simply described as amazing, has stirred up some feeling in him —the desire to learn the vernacular language, Shona. And he wants to be speaking the language fast; in time for his next match for Zimbabwe.

Darikwa was born and raised in West Bridgford, Nottinghamshire, to Zimbabwean parents but has managed to quickly gel with the team despite not speaking any local language.

“It’s been good trying to fit with the rest of the team and I think I am managing very well. I don’t speak Shona so it’s been a bit difficult but the players speak English, the technical team speaks English and hopefully when I come back next month I will be speaking a bit of Shona,” the 26-year-old fullback said in an interview with The Sports Hub.

Darikwa made his Africa Cup of Nations (Afcon) qualifier bow for Zimbabwe in the first of the back to back fixtures against African giants the DRC a week ago in Kinshasa.

It had taken a long-time for Darikwa to get the relevant papers to enable him to represent Zimbabwe on the international stage.

In October 2013, Darikwa made himself available to play for Zimbabwe but reconsidered his position after he was asked to pay a “processing fee” of about.

US$5 000 by a former Zimbabwe Football Association official.

In 2016, Darikwa took to twitter to register his displeasure at the lack of professionalism at Zifa.

“Yes, I received a call-up to the Zimbabwe national team, but due to lack of professionalism from certain people, I will not be there,” he tweeted, before pulling the tweet down moments later.

He went on to make his first appearance for Zimbabwe on November 8 last year, in a friendly defeat to Lesotho.

Darikwa finally got his Zimbabwean passport a little less than a month ago, thus making his competitive debut in the 2019 Cameroon Afcon qualifier against the DRC.

“It’s been an amazing experience for me you know. Those were two tough games against a very good team, but we went to DRC and we believed in ourselves. I think we sent a message to Africa taking four points off a big team like DRC,” Darikwa said.

Back in England there are many intimidating stadiums but Darikwa had his first experience of the hostility of playing away from home in Africa.

“The intimidation out there is at a whole new level. The (DRC) fans tried to put off our game, but we needed to believe in things we do and we had to show them a little bit of ‘fumbu’. It was good to show them what we know.

“And the experience of playing at home was amazing. It was really an amazing feeling to see the people of Zimbabwe coming out to support us like this. We need this and I hope to do them proud on a personal level,” he said.

“Fumbu”? Many may be cracking heads trying to understand what that is all about.

It is Darikwa’s best attempt at pronouncing Ronald Pfumbidzai’s surname. Pfumbidzai gave Zimbabwe the lead at the Stade des Martyrs in Kinshasa to set Zimbabwe on course for a historic victory.

Interestingly, Darikwa was not caught out of place when Pfumbidzai took his “lecturer” celebrations to DRC where he pretends to be a lecturer imparting wisdom to his students.

“It was good fun. I have seen him do it before. I knew he had done it before, but it’s good to enjoy the moment like that you know,” Darikwa revealed.

Pfumbidzai made the same kind of celebration at the National Sports Stadium last year after he scored for CAPS United against DRC champions TP Mazembe in the Caf Champions League.

for Darikwa, who misses the Warriors next fixture away to Liberia next month due to suspension, the dream is to play at the Afcon.

“The dream is to play at the Afcon. We are top of the group so if we continue to play the way we have been playing I am sure we will be there,” he said.

Darikwa will be available to play for the Warriors in the final Group G tie at home to Congo.

At least that gives him more time to learn Shona.