High riding Zim Dancehall Enzo Ishall has apologised after female fans temporarily took leave of their senses and started undressing on stage while dancing to his hit song “50 Magate”. 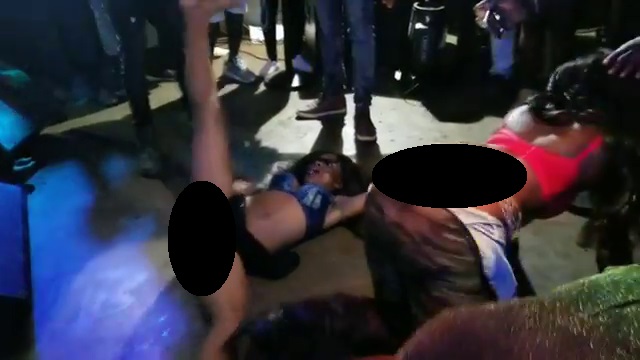 The incident took place in Shamva at the weekend at a Miss Shamwa pageant where some ladies took the song to heart and went wild twerking while exposing themselves. The musician and his handlers are now considering not playing the song at all as they are afraid of getting into trouble with the authorities over the behaviour of the female fans.

The fact is that I am failing to contain the hype around the Magate song. I can’t stop the train. I can’t even handle the fans myself; they love the song so much and the challenge is getting out of hand especially with the ladies…I have only seen this type of dancing on television being practised by Jamaican dancehall choreographers. I was surprised to see this in Shamva; the ladies just stormed the stage after hearing the Magate sound intro. I have never met those ladies and they were not part of our crew.

Enzo Ishall’s manager and Chillspot proprietor, DJ Fantan told H-Metro that they are now considering not playing the song.

As Enzo’s manager, this has become a huge task for me at every event that he is performing. I have since told him to only perform the first lines of the song or we will completely avoid it on our playlist during public events…We are very much aware that we have a working censorship Board in Zimbabwe that stands for sanity in our arts.

The events in Shamva were unforeseen and uncalled for. We would like to apologise and take this time to read the riot act to our fans. To our fans, Enzo is saying ngatiiteyi zveMagate chete, izvi zvamakuita ndezveMadhishi.