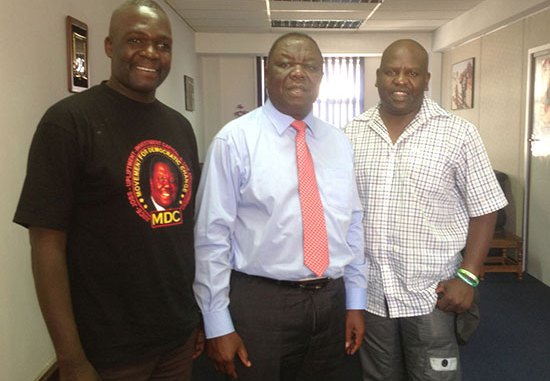 Exiled  MDC-T aspiring legislator for Mbare Eric Knight was in 2013 reported by the Herald as on the British police wanted list for allegedly forging his business partner Mr Ezra Sibanda’s signature to withdraw money and recorded under case number 011996R/13.

“Ladies and Gentlemen. I hope i find you well. Just as I had promised a couple of days ago, I am here just to make a simple announcement to you all my friends, fans and relatives. Today the 1st of January 2018, I would like to tell you all that I am no longer a member of the MDC Party. This is a decision I personally made because of more than one reason. I have already informed the Party through other channels.
Without giving much details at this stage, I can only disclose that among the various reasons that prompted me to this decision, is the fact that my personal vision, beliefs and ambitions were no longer compatible with the Party’s policies and modus operandi. In more than one way I also felt that we were no longer on the same wave-length in terms of priorities and goals. Somewhere along the lines I felt that there has been a digression from the principles that attracted me to the movement in the first place. I ceased to see the direction and the trajectory the organisation was now embarking on. I have made several attempts get clarity and explanations on that front, but sadly and unsuccessfully got any answers, except of being accused of betrayal, disloyalty and have sometimes being labelled by all the negative superlatives normally associated with anyone with any open mind.

Out of respect of the MDC as a party, I will only publicise further details if it is necessary. All I can say is that my commitment to playing a significant role in helping Mother Zimbabwe rise up again is as strong as ever, if not better.
I am a Zimbabwean by blood and birth and will not hide my head in the sand when it comes to issues that affect my country, hence my outspokenness that unfortunately irked other people within the Party.

I am the kind that will not hesitate to criticise when necessary and conversely give appraisal where it is deserved.
I have prayed and consulted close people about my decision. I would like to make it very clear that as a loyal and patriotic citizen that I have always been, I will continue to serve my country faithfully in any capacity and level that God may have ordained. I will work with any individual, institution or group that commits itself to the betterment of the lives of Zimbabwean people. As a professional Media Practitioner, I will also continue to play my role henceforth and from anywhere in the world.

Withstanding the foregoing, I wish to state it that I have not joined any Political Party at the moment as I am still weighing up my options prayerfully.
Until and as when anything changes, I will concentrate on my Media, Broadcasting and Information Portfolio and will continue to be a good ambassador for my country, people and government as and when required to do so.
On that note, I wish to thank the Movement for Democratic Change for giving me an opportunity to have worked with them. I thank specifically Mr Morgan Tsvangirai and all his lieutenants who believed and still believe in me. It is time to part ways and thank you for respecting my decision.

And to all Zimbabweans and especially MDC sympathisers, I pray that God grants you peace and favour in all your endeavours, and that He also grants you the prudence to know that your life and your country is bigger than any Party.

Lets put the country first and let us be tolerant of each other regardless of Political differences. Zimbabwe is for you and me. God bless Zimbabwe! God bless Africa!”

It is widely believed that this decision was triggered by Charlton Hwende who called him an opportunist .