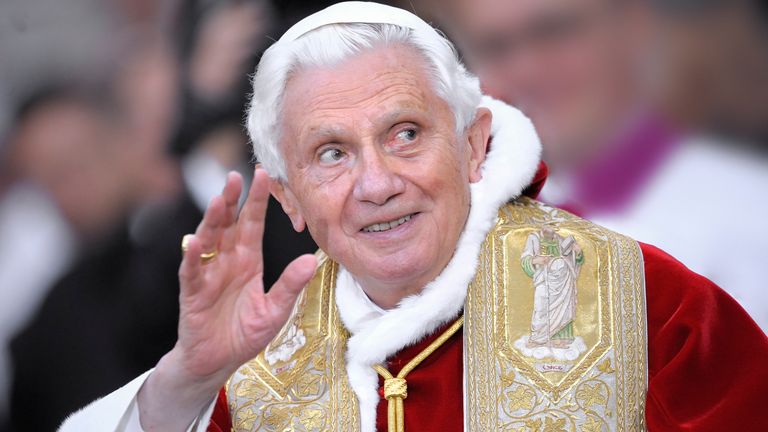 Former pope Benedict XVI, who became the first pontiff to resign in some 600 years, has died aged 95.

Pope Francis, who replaced him as head of the Catholic Church, had asked the faithful to pray for him at the end of his general audience on Wednesday morning.

The Vatican said Benedict’s body will lie in state in St Peter’s Basilica from Monday.

“With sorrow I inform you that the Pope Emeritus, Benedict XVI, passed away today at 9:34 in the Mater Ecclesiae Monastery in the Vatican,” a spokesperson said.

“As of Monday morning, 2 January 2023, the body of the Pope Emeritus will be in Saint Peter’s Basilica so the faithful can bid farewell.”

Pope Francis will preside over Benedict’s funeral Mass in St Peter’s Square on Thursday – an unprecedented event in which a current pope will celebrate the life of his predecessor.

The health of the Pope Emeritus, as Benedict was called after he stepped down, had undergone a “worsening in the last hours” due to his age, the Vatican said, and doctors were constantly monitoring his condition.

Francis had gone to visit Benedict at the Mater Ecclesiae Monastery in Vatican City after the audience on Wednesday.

Cardinal Vincent Nichols, the head of the Roman Catholic Church in England and Wales, said Benedict was “one of the great theologians of the 20th century”.

He said: “I remember with particular affection the remarkable papal visit to these lands in 2010. We saw his courtesy, his gentleness, the perceptiveness of his mind and the openness of his welcome to everybody that he met.”

‘One of the greatest theologians of his age’

Prime Minister Rishi Sunak tweeted: “I am saddened to learn of the death of Pope Emeritus Benedict XVI.

“He was a great theologian whose UK visit in 2010 was an historic moment for both Catholics and non-Catholics throughout our country.

“My thoughts are with Catholic people in the UK and around the world today.”

The Archbishop of Canterbury, Justin Welby, hailed Benedict as “one of the greatest theologians of his age”.

He said: “Today I join with the church throughout the world, and especially with the Holy Father, Pope Francis, and all in the Catholic Church, in mourning the death of Pope Emeritus Benedict XVI.

“In Pope Benedict’s long life and ministry of service to Christ in His Church he saw many profound changes in the church and in the world.”

He added: “Pope Benedict was one of the greatest theologians of his age – committed to the faith of the Church and stalwart in its defence.

“In all things, not least in his writing and his preaching, he looked to Jesus Christ, the image of the invisible God. It was abundantly clear that Christ was the root of his thought and the basis of his prayer.

“May he now rest in Christ’s peace, and rise in glory with all the Saints.”

An announcement that shocked the Catholic world

Benedict had lived in the Vatican, a separate nation-state that is within the boundary of the Italian capital Rome, after he ceased being pope in 2013.

He had become increasingly frail in recent years after dedicating his post-papacy life to prayer and meditation.

For hundreds of years before Benedict became the Holy Father, popes had headed the Catholic Church until their deaths.

On 11 February 2013, Benedict’s surprise announcement to stand aside shocked the Catholic world, and forced the church to grapple with an event it had not seen in centuries.

He said he wanted to resign as he no longer had the physical and mental strength to run the church.

Before being elected pope in 2005, the then Cardinal Joseph Ratzinger served as the head of the Vatican’s doctrinal watchdog, called the Congregation for the Doctrine of the Faith.

He held the powerful role for 24 years, earning the nickname “God’s Rottweiler” for his strictly conservative theological views.

Some ultra-traditionalists even refused to acknowledge Pope Francis as a legitimate pontiff after Benedict stood down, criticising Francis for his more welcoming approach to members of the LGBTQ+ community and to Catholics who divorced and remarried outside the Church, arguing both were undermining traditional values.-Skynews