Father Fidelis Mukonori, a Catholic priest who mediated talks between Zimbabwe’s former President Robert Mugabe and the military generals who toppled him, says former First Lady Grace Mugabe participated in some discussions leading to the stepping down of Mr. Mugabe after a military intervention.

In an exclusive interview with VOA Zimbabwe Service, Father Mukonori, for the first time, revealed that Mrs. Mugabe attended some of the meetings between Mr. Mugabe and the generals. The generals were not happy that Mrs. Mugabe was allegedly attacking them, war veterans and senior party members like then Vice President Emmerson Mnangagwa, now president, at ruling Zanu-PF party rallies.

Asked if Mrs. Mugabe participated in the discussions, Mukonori responded, “She came in when she had to.” 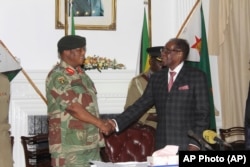 Mukonori though was quick to add, “But she was not the major focus. We were zeroing in on the commander-in-chief of the Zimbabwe Defense Forces, and the Head of State and government and first secretary of Zanu-PF, President Robert Mugabe. For us that was the center of focus. We didn’t want to lose focus.”

Father Mukonori says as far as the generals were concerned Mr. Mugabe was answerable to the (former) first lady. “The first lady was the secretary for Women’s Affairs and that in my view was part and parcel of the responsibility of the president. So we did not have to deal with that issue.”

There were unconfirmed reports that as the plot to oust Mnangagwa thickened, there were also plans by the former first lady or her backers to cause an arrest or elimination of army General Chiwenga – deemed to be too close to Mnangagwa.

Asked about the reports, Father Mukonori said, “It was denied (by the former first lady).” He added, “I brought up the issue personally during the discussion period with the commanders.”

There were also allegations that a statement read by now detained former Zanu-PF Youth League leader, Kudzi Chipanga, had been authored by the former first lady or her office.

FILE: Zimbabwe’s President Robert Mugabe (C) greets supporters with his wife Grace in Tsholotsho whilst on the campaign trail, 23 March 2005.

Father Mukonori told VOA Zimbabwe Service that when this issue was raised, Mr. Mugabe personally called the first lady to explain to the generals the source of the statement.

Mrs. Mugabe denied the allegation that she had authored it. In the press statement, Chipanga said youths were prepared to defend Mugabe to the last man.

Said Chipanga: “… We are, therefore, taking a stand against those who are bent on sowing division among our people and also those taking advantage of the privilege of their appointment by our president to extort guarantees and immunity for fugitives, boarder (sic) jumpers from the same appointing authority.

“These people should be warned that we the youth are watching in our millions and those who wish to ride on the back of the tiger will end up inside. As a revolutionary party, Zanu-PF is evolving and placing itself at the forefront of the constitutional dispensation we fought the oppressor for and obtained.” 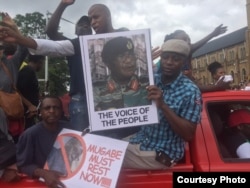 The remarks were a direct response to warnings given by General Chiwenga that the ruling Zanu-PF should not purge war veterans from its ranks. But after being allegedly abducted and beaten up by the army, Chipanga offered an apology.

He said, “I was ill-advised to read a document that was handed over to me by one Rodney Dangarembizi (Dangarembizi is a close associate of former First Lady Grace Mugabe’s who organized her 50th Birthday Dinner in 2015) yesterday. As a leader of the Zanu PF Youth League, I have since reflected and I personally admit that I erred together with my entire executive to denigrate your highest office. We are still young and make mistakes and we have learnt a lot from this mistake. I have not been persuaded to offer myself to the state media but I have personally reflected and realized my mistake, thank you,” said Chipanga.-VOA