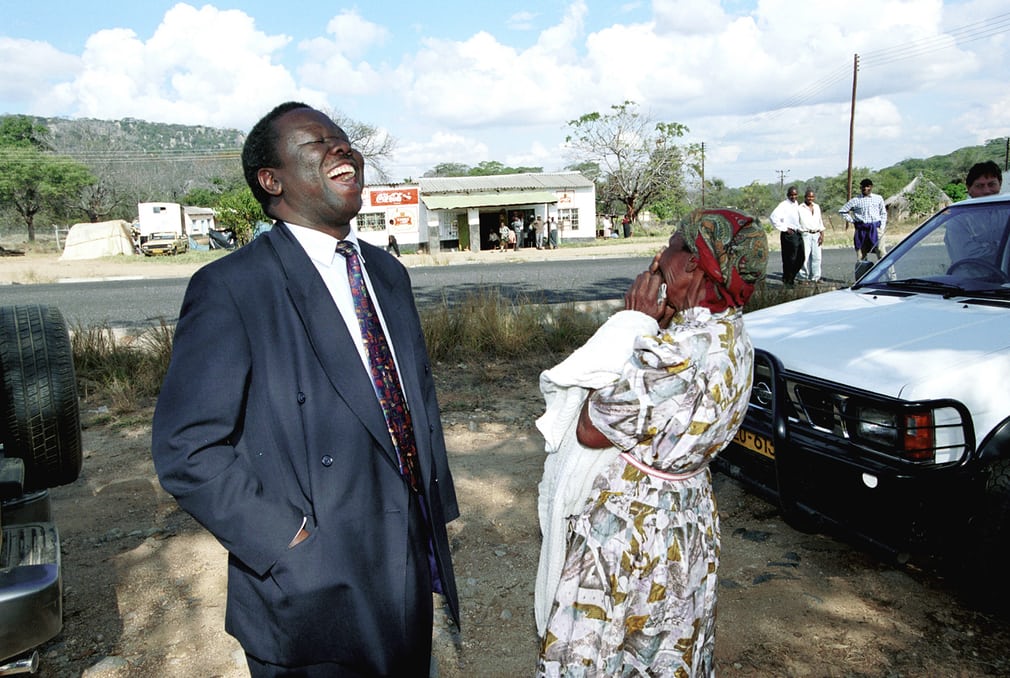 Harare – The late MDC founder Morgan Richard Tsvangirai was a man with many faces.

He was a trade unionist, politician, golfer and you could not miss his infectious smile.

Above all, he was a father and Mail and Telegraph trailed one of his daughters Vimbai and she opened up on life as Morgan Tsvangirai’s daughter.

She revealed that her father’s political career had a major influence in her upbringing as a ‘normal girl from next door’!

She lived in exile at a tender age.

Vimbai said she always feared for her parents’ lives and this was not an easy feeling for her- but it made her stronger.

“I grew up in a family of six children, I was born in Bindura. My father was still at Trojan Mine and I am the third child in a family consisting of  two boys in front of me then comes myself, the first daughter, then another girl, then twins, a boy and a girl so we are three boys and three girls in our family.

“When we moved to Harare, we stayed in Ashdown Park, life back then was a bit simple, he (Morgan Tsvangirai)was still secretary general at Zimbabwe Congress of Trade Unions”, narrated Vimbai.

She recalls that life began to change after the formation of Movement for Democratic Change .This was the first real opposition in the country and it was a major security risk.

“Before the formation of MDC my mom (the late Susan Nyaradzo Tsvangirai) would take us to school , it was just a normal family life, we would go to school and dad coming home around 5 to 6pm, just your normal everyday life but life began to change during their days of stay aways at ZCTU.

“We started to see a lot of people coming home, a lot of faces, some famous faces, we could not understand what was happening and what was going on and that is when we realised that life was starting to change,” Vimbai chronicled.

She said the family ceased to have a private life as they were subject of discussion at school, church and in different social circles.Her mother even tried to stop her husband but the late iconic politician had a mission- he was simply unstoppable!

The life of being Morgan Tsvangirai’s daughter came with a price, the family would receive visits from the police at night and sometimes her dad’s whereabouts were kepta well guarded secret even from her siblings for security reasons.

At the height of political rivalry between MDC and Robert Mugabe led Zanu PF, Vimbai and her siblings had to seek political exile in different countries.

“When we moved to Strathaven around 2000,  it was nolonger safe especially for us the children and we went into political exiles, I went to Australia, some of my siblings went to Canada, others went to South Africa because it was not a safe place here in Zimbabwe,” she said.

She was to pursue her tertiary education in Australia where she attained a Degree in Development Studies majoring in Urban and Regional Planning.

She got a job as a town planner for Sydney City Council.

“I did my bachelors in Development studies majoring in urban and regional planning and I worked for Sydney City Council as a town planner.

“You would have those moments where you would fear for your parents’ life because you do not know any day, it was like you were prepared for anything because politics during the Mugabe era was bad, it was not easy.

“I remember calling him while I was in Australia during his treason trial days. I called him and I was like dad so this is it we might never see each other when you are given maybe the death sentence or what ever and he said something really profound to me, he said if it’s for the people yes I am ready for it,” she said.

She describes her father as a people centred man who would do anything to save his people from misery.

“Dad has always been a people person, he was not a selfish man, I remember most of the time when he was the prime minister, we would know you need to change this, now you need to change that, to him it was all about the people, it was never about him, it was never about self-enrichment or your typical politician who want to amass wealth, he was not that type of person.

“He had an ordinary life, ordinary cars and all that so he has never been a person who wanted wealth.

“Even business sometimes if you show him business, he would be afraid and say no, he was always a person who wanted to see a better Zimbabwe,” Vimbai narrated.

In the middle of the conversation, Vimbai pauses a little as she starts narrating her traumatic 2008 experience and tries to be brave about it.

“He had become a father not only to us, but to the nation and to his political party because sometimes you would see people who came from as far as Mbire and where ever coming to our house.

“Some of the women showing their bruises on their back saying president look we have been beaten, we have been raped, so he had become a father to the MDC family,” she said.

In 2009 she lost her mother whom she described as a unifier and a pillar of strength not only to her but  to her father as well .

She saw the other side of her father, the side  she had never seen before.

“I remember 2009, mom was a pillar to my dad, she was sort of like the one who was managing him, I remember after the death of my mom he would be like “nhai veduwe $1 ichiiko (what is a dollar, can someone please tell me)” because he just concentrated on politics and mom was like the manager of his life and everything else but she was  a politician in her own right.

“In 2009, the death of my mom was really devastating to dad, “I had never seen a person so sad and lost because mom was like a friend, they were best friends, everywhere they would go together, they were together even in politics.

“I remember every time when they came from  work they would sit under a tree that was at our house in Strathaven, we all knew that that was their place that they would go and sit and discuss things, so he had to come back home and just sit alone so it was a very difficult time for him and for the family as well because she was not only a pillar to us but also to dad. That is when I came back from Australia and I never went back .

“There are moments where he would sit by himself,you would see him crying. Even at the funeral he was in pain because he had sustained some injuries in the accident that took mum’s life.

“As children we always  saw our father as a strong man in terms of attacks and everything, he was now so vulnerable after the death of my mother.

“In terms of feelings, you could tell that dad had been crying sometimes so it was a very difficult time for him,” she added.

Another tragedy struck again, this time her father lost a grandchild -a month after losing his wife and that’s when he turned to God.

“A month later after the death of my mom, my brother’s child passed away, he drowned in a swimming pool, again it was a blow because it was just after a month.

“One fascinating thing, every time we did our Wednesday family bible studies, he would always ask “ how do I grow my faith” so yes he was born again so we started to notice something as kids that what was happening to dad he is deteriorating,” she said.

Vimbai and her siblings noticed that something was wrong with their father when his health started deteriorating but that did not stop him from doing his job.

“His health, you could tell that something was wrong with this man but he couldn’t really say it out, he was always the man who was strong, he did not want to show that side, that I am weak, I am vulnerable  and everything but you could tell that he was sick.

“He was not well and I remember telling him dad, I think he wanted to go out of Harare, somewhere in the villages to campaign and everything and I was like no dad you are not well, you need to rest but he was always a person who would push himself to do his work.

“Politics was part of him, you couldn’t separate him from politics so that is when he got sick and started to deteriorate until he found out that he had cancer of the colon, this was really devastating for us and for him.”

Morgan Tsvangirai was diagnosed with colon cancer, a disease that eventually took his life.

Even in his last days while he was in a hospital in South Africa Morgan thought of his MDC family that he had left back home and wanted to come back for them but unfortunately his maker had other ideas.

The doctors told the family that Morgan had a few days to live and the family needed to spend some time with him, a few days later Morgan died, leaving a gap that was never to be filled in both his family and the  party MDC.

“When he was operated on for colon cancer, he was really sick but even after that he would still come back and push until the last days of his life we went to South Africa and I remember he was now aware, but I guess something in him thought he was coming back because he would always say give me my passport.

“The doctor would say he is left with a few days, you need to spend time with him because he does not have time but to him I think maybe he still thought that he still had time to go back home and push, his aim was to push until at least after the elections.

“That was his dream to say at least if God takes me after elections, I think it is better but I guess it didn’t happen so that was basically him, he was really a funny guy,” Vimbai said.

Vimbai took it upon herself to continue with her father’s legacy as she too joined politics, a career that both her mother and father were passionate about

Tsvangirai-Java contested and won in Glen View South constituency on an MDC Alliance ticket in the recently held harmonised elections .

She chose that constituency because that is the area that her later mother had some projects for empowerment of the residents.

Vimbai is married to Apostle Batsirai Java of Tabernacles of Grace Ministry.

Makosi Grabs Ginimbi In the Gym