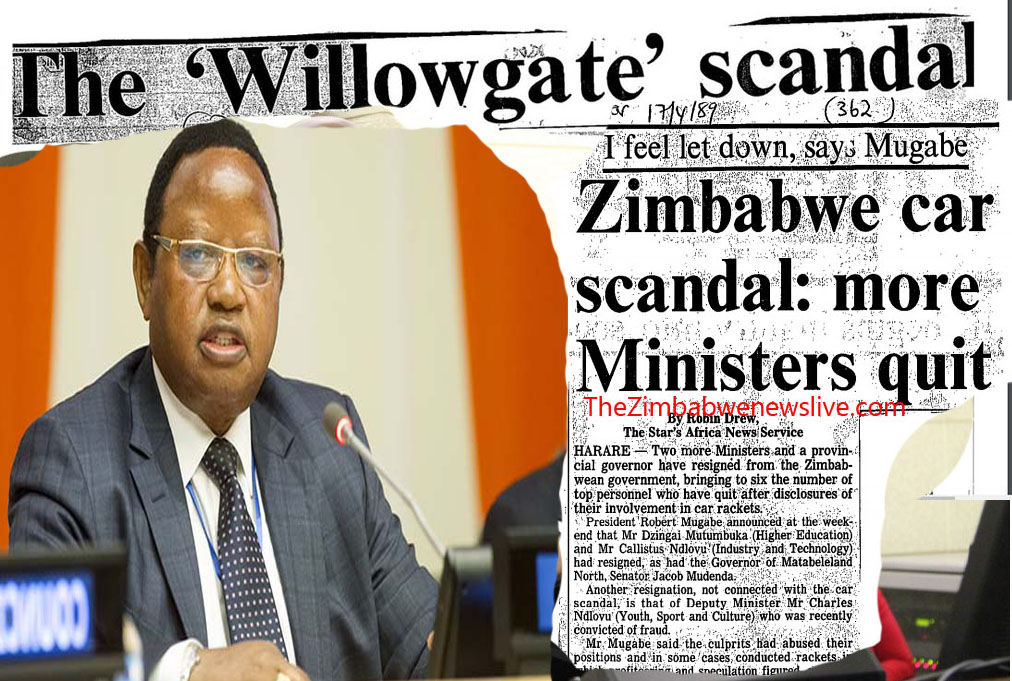 -In our view this was a gross abuse of a Minister’s position , powers and previledges.-Justice Sandura

The Sandura commission’s first inquiry rocked the government at the time. The Zimbabwenewslive.com will in the next few weeks make available the more details of the report. This week we look at the newly appointed Foreign Minister Fredrick Shava.

The Commission heard evidence from Messrs A. Girach, D.E. Sly, A. Mahomed and F.M.M. Shava.

Mazda 323, Registration No. 445-759d
The evidence from Shava and Mahomed was as follows:-
In 1987 Shava approached Puzey and Payne in Harare and indicated that he was looking for a Hazda 323 motor vehicle to purchase. His name was taken down and in December 1987, he was informed that the vehicle was available for collection. At that time he could not afford to buy the motor vehicle because he did not have enough money. Consequently, he told Mahomed, a friend of his, that he could purchase the motor vehicle if he wished to.

Unfortunately, Mahomed did not have enough money to purchase the vehicle either.It was then agreed that Shava would use his overdraft facilities , purchase the motor vehicle and be refunded the purchase price by Mahamed at a later stage . The motor vehicle was then purchased and delivered to Mahamed . The full purchase price of about $19 000 was subsequently refunded by Mahomed on the 15th February, 1988 .The vehicle was first registered in Shava ‘ s nane on the 24th
December, 1987 and was s ubsequently reqistered in the na
of Hahoned’ s company on the 4th January , 1988 .

Nissan Cabstar Truck, Registration N0. 409-163R
Shava’s evidence was that he purchased this two-and-a-half ton truck in terms of a hire purchase agreement for $45 000 at the beginning of 1988 from Kenning Motors in Bulawayo. He subsequently sold it in May, 1988 to a businessma at chitungwiza for $75 O00. He said that he sold the truck
because he no longer needed it. He, therefore, made a profit of $ 30000

This motor vehicle was purchased on the 10 June, 1988 from Zimbabwe Motor Assemblers and Distributors (PVT.) Ltd. and was registered in the name of Mrs Shava on the same day .
The purchase Price which was paid by cheque was $ 20 128,14. Shortly after its purchase the motor vehicle was sold to Flame Lily Panel Beaters of Harare for $65 000 and change of ownership was effected on the 15th June, 1988. A profit of about $45 OOO was realised in less than 5 days.
When he first gave evidence, Shava lied when he stated that he could not recall the price at which his wife had sold the truck in June 1988. However, he later changed his evidence when he realised that he could not go far with his lies because his answers were becoming more and more ridiculous as he was questioned further.

This motor vehicle was purchased from Willowvale in June 1988 and was registered in Shava’s name on the 6th June, 1988. The purchase price, which was paid by cheque, was $32 780,00. This was the dealer’s price which was about $5 OOO less than the retail price. The motor vehicle was subsequently resold to Girach for $95 000 and change of ownership was effected on the 19th July, 1988. In the circumstances, the profit realised was $62 220. When
Girach, Sly and Shava gave evidence they maintained that the
vehicle had been sold fOr $30 OOO which was untrue. However, after further evidence had come to light and this was put to Shava he decided to tell the Commission the truth. He admitted that he had lied to us and stated that the motor vehicle had been sold for $95 000.

It is obvious from the evidence that Shava was behaving like a car delear. In one year he made a profit of about $140 000 from buying and selling motor vehicles. That sum represents the profits which Shava admitted in his evidence. In reality , the figures maybe much higher .He ignored the price control legislation and made huge profits.In our view this was a gross abuse of a Minister’s position , powers and previledges.

A number of people commietted perjury when they testified before the commission in connection with the motor vehicles dealth with in this chapter .We hope that the Attorney-General will institute criminal proceedings against them in respect of pejury and surbornation of perjury.