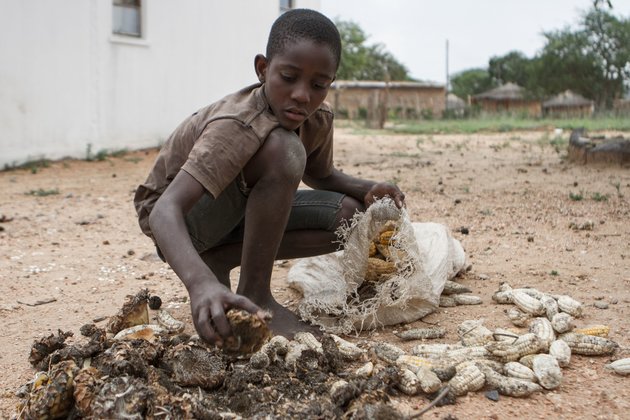 A drought, cyclone-induced floods and an economic collapse have left Zimbabwe on the verge of its worst-ever famine.

The southern African nation will probably run out of corn — its staple food — by January and about three out of five Zimbabweans won’t have enough to eat, according to the United Nations World Food Programme.

While Zimbabwe has experienced intermittent food shortages for the last two decades, the problem has mostly been limited to rural areas. This time, 3 million of the 8.5 million people at risk of food insecurity are in cities, said Eddie Rowe, the WFP’s country director in Zimbabwe.

“You will have a lot more people hungry in Zimbabwe than ever before,” he said. In the past, “in urban areas the alarm bells were not ringing.”

The government has already declared a state of disaster because of the drought, which has decimated harvests. One of the strongest-ever cyclones in the southern hemisphere also destroyed crops in March and a deepening economic crisis has limited the government’s ability to address the looming shortfalls.

Since a parity peg to the U.S. dollar was dropped in February, the local currency has slumped to 13.85 to the dollar, making it the world’s worst performer. That’s slashed spending power in a country where most goods are imported. Zimbabwe is already struggling to find sufficient foreign exchange to fund imports of fuel and wheat.

“The drought has just exacerbated the situation,” said Jee-A van der Linde, an economist at NKC African Economics in Paarl, South Africa. It will “deteriorate to a point where they need foreign aid.”

The country’s corn crop is expected to plummet 54% this year and Agriculture Secretary Ringson Chitsiko warned in March it only had seven months of grain stockpiles, including corn.

Zimbabwe has made attempts to replenish its corn stocks, but an international tender for at least 750,000 tons of corn failed because the government and bidders couldn’t agree on financial terms, two people familiar with the situation said.

The country has now agreed to buy 150,000 tons of corn from South Africa, the people said. However, analysts estimate Zimbabwe could need as much as 1 million tons of corn imports.

Sibusiso Moyo, the country’s foreign minister and head of its grain importation committee, didn’t respond to messages sent to his office seeking comment.

Zimbabwe’s crisis has been compounded by smaller harvests in neighboring countries, such as Zambia, which often have surpluses

The white corn preferred by Zimbabweans also limits the pool of potential suppliers, as the yellow variety is more common in other parts of the world. In southern Africa, white corn is mainly reserved for human consumption and yellow is fed to animals.

Extreme Weather Is Shaking Up Africa’s Corn Trade This Year

That, combined with Zimbabwe’s discouragement of genetically modified imports, reduces its options for corn supply to South Africa and Mexico, said Wandile Sihlobo, chief economist of the Agricultural Business Chamber of South Africa.

Zimbabwe’s creaking infrastructure poses another challenge. The rail system has fallen apart and most imports will need to come by road. Shipments from overseas could take a month to get to ports in neighboring countries.

“If they don’t begin importing now, logistics will remain a concern,” Sihlobo said. “There might be too much pressure.”

While other southern African countries ranging from Namibia to Malawi may need aid, Zimbabwe will be the hardest hit, the WFP’s Rowe said.

Their needs won’t be “of the magnitude of Zimbabwe,” he said. “The difference is the economy.”