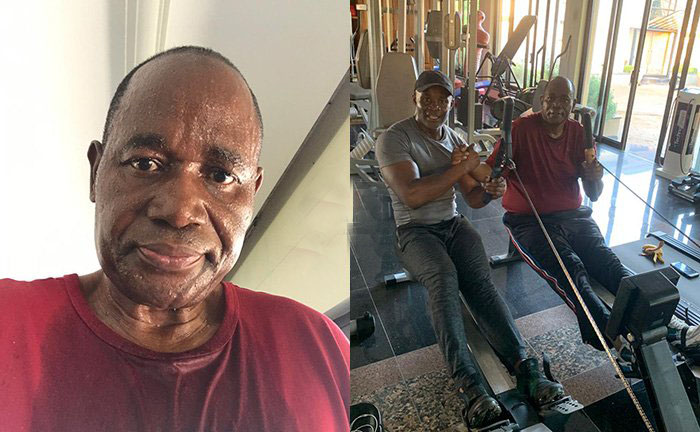 Confronted with rumours and speculation about his dramatic weight loss, former Reserve Bank of Zimbabwe governor Dr Gideon Gono has audaciously offered USD$5000 to anyone who can prove he is sick and has even offered to undergo any form of medical checkup or test.

In May this year, Nehanda Radio exclusively reported how Gono had shed an astonishing 35kgs in 9 months after investing in a home gym and hiring the services of well-known personal trainer Kenny Murungweni. Gono who also occasionally uses the services of fitness trainer and Norton independent MP Temba Mliswa, said he was now putting on suits he used to wear 20 years ago.

That story and a subsequent follow up videos released by Nehanda TV last week showing his rigorous workouts inflamed speculation even further amongst the doubters.

“Lest your many readers and followers forget to eat moderately and train afterwards… herewith my latest session this morning… consistency, persistence and determination works… at 60 years old, I feel like I’m 40… I’m putting on clothes that I used to put on in 1996!,” Gono said of the videos.

“And some people still think that GONO is sick… hahaha… I still hold my challenge open to your readers… I’m willing to publicly undergo ANY form of medical checkup from bloods chemistry, Physio, cardio, HIV generation 1-4, any venereal or STI diseases, running or walking competition, sleeping tests, psa, high blood pressures, cholesterol and more…you name it.

“If you find anythAdvertisementing wrong with me, I will pay USD 5k equivalent in Rtgs at bank rate to a charity of their choice… if my claims are true, the challenger must do same!!!, Gono told Nehanda Radio.

Gono told Nehanda Radio his secret was to; “Eat well and moderately, exercise consistently (not necessarily every day), adequate sleep (6 hrs at least/day), drink sufficient water daily for your body size, work, rest and play, don’t drink, eat or do anything in excessive measures.

“Always be conscious of your body needs and listen to it, spend time with friends and family, avoid toxic people in you life, negative thoughts or people in your life are a drag to your health… rather spend more time with positive people… people who no matter what the situation is, will tell you the sunny-side of the situation and help you to move on.

“The spiritual side of our beings is also very important. At the end of the day the person you take to bed every day is called YOUR CONSCIENCE… make sure he/she is free of guilt,” Gono said.

Seven months after we first profiled his amazing journey, Nehanda TV got another look at what he is now doing in terms of workouts ahead of Christmas. Speaking to Nehanda TV, Gono said;

“The kids in video (twins) are called Ayanda and Zandile Malaba… daughters to one of my twin daughters. I have twin daughters, Pride and Praise. Praise gave birth to twin girls in March 2018.”

Gono who turned 60 in November said “My Weight-loss journey has been a long and consistent one. It’s just that I have been out of the public eye for a very long time so those seeing me today think that it’s been a miracle-Weight loss or an event… no

“It’s a journey characterized by discipline, dedication to a voluntary cause, determination to achieve one’s set goals and objectives, good dieting where one eats to live not live to eat as I used to do, good sleeping habits, persistent and irritating frequency in the gym and on road-walks and runs.”

“I invested a lot in a home gym and hired a well-known personal trainer by the name Kenny Murungweni aka in the fitness circles as The Rambo. We have literally been training every day for the past 8 months and our mutual addiction to the fitness cause is now legendary among my friends and family. Those around me get my “V11s” or workout evidence on a daily basis.”

Speaking to Nehanda Radio, Temba Mliswa said; “I was his personal trainer for a long time and then left, then got Gerald Maguranyanga to work with him and so forth. Listen he is one person that understands the lifestyle that is needed in terms of one being healthy and he invests a lot in that.

“In one month that I was training him he lost 22kgs, so that weight loss has nothing to do with any economic challenges or anything. Its his mental strength, if he wants to lose weight, he will lose weight….kudos to him, great mental strength… his work ethic is out of this world.

“I coached national team players and they would complain but Gideon never complains. He is a person who works like the military where he complains after duty and I’m not an easy person when it comes to the aspect of physical training….” Mliswa told Nehanda Radio in May this year.