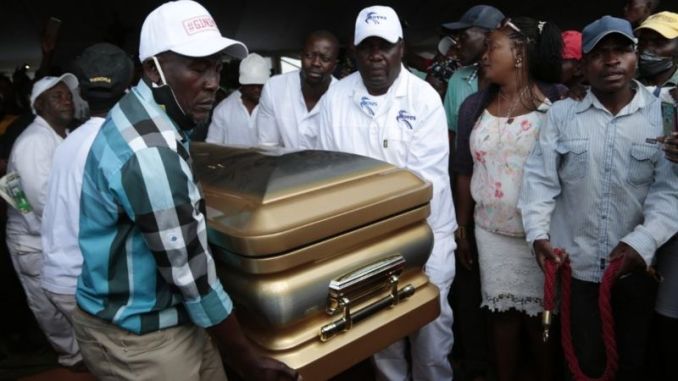 A ROW has erupted over the estate of the late socialite, Genius Kadungure — who was popularly known as Ginimbi.

This comes as his family has approached the High Court seeking the removal of the executor of his estate, as well as the nullification of a will he is said to have left behind.

The socialite died in a road accident on November 8 last year when his Rolls Royce Wraith collided with a Honda Fit in Harare, causing it to veer off the road and hit a tree — before going up in flames.

Three of Ginimbi’s friends also died in the accident.

Little detail is known about the expanse of the late socialite’s wealth besides the mansion he left behind in Domboshava, as well as a fleet of luxurious vehicles and some rumoured properties in Botswana and South Africa.

In court application lodged on Tuesday, Kadungure’s father, Anderson — and his sisters Juliet and Neria — are seeking the nullification of his will, as well as the removal of lawyer Patricia Darangwa as the executor of the estate.

Darangwa and the Master of the High Court in Zimbabwe are cited as respondents.

According to an affidavit by Juliet, Darangwa approached the family on November 25 last year, claiming that she was the executor of Kadungure’s estate.

“Whilst still gathered at the deceased’s homestead in Domboshava and before his burial, we were approached by the 1st respondent (Darangwa), who indicated to the family that she was an attorney and in possession of the deceased’s will that he had left in her custody which will, among other things, provided that she be the testamentary executrix (executor) of the deceased’s estate.

“The family was surprised by the news of the will since the deceased never mentioned anything to do with writing a will to any member of the family.

“We were, therefore, bewildered by the talk of a will, coming as it did amidst shock, mourning and immense media publicity due to the popularity of the deceased,” reads part of Juliet’s affidavit.

Darangwa also allegedly threatened the family, saying she would sue them if they declined to accept the will and appoint her as executor of the estate.

“Before, and in the morning of November 25, 1st respondent unduly influenced the family to accept the will and threatened that if as the family we chose to reject it and her executorship, we would have tarnished her reputation and she was prepared to sue us and subject the estate to unwanted delays, even all the way up to Supreme Court level.

“The family accepted the will and recommended her appointment in terms thereof as executrix, only because the 1st respondent influenced us to do so,” Juliet claimed further.

The family then sought the services of another lawyer who allegedly established that Darangwa had attempted to sell off some of Kadungure’s assets without the approval and authority of the family, including a Lamborghini.

The family said it decided to approach the High Court after the Master of the High Court in Botswana, where Kadungure had business interests, rejected the will because it had not been signed by the late socialite.

“However, the Master of the High Court of Botswana rejected the will, citing the fact that it was not signed by the deceased.

“All applicants herein once supported the 1st Respondent in Botswana until in February 2021 when we recanted what we had said in support of the first respondent, after noticing the fakeness of the will she had produced,” Juliet averred further.

The family is now seeking to have the decision by the Master of the High Court to accept the will as the legitimate will of the former socialite declared null and void, as well as to remove Darangwa from the position of executor.

Darangwa and the Master of the High Court are yet to respond to the application.-Dailynews