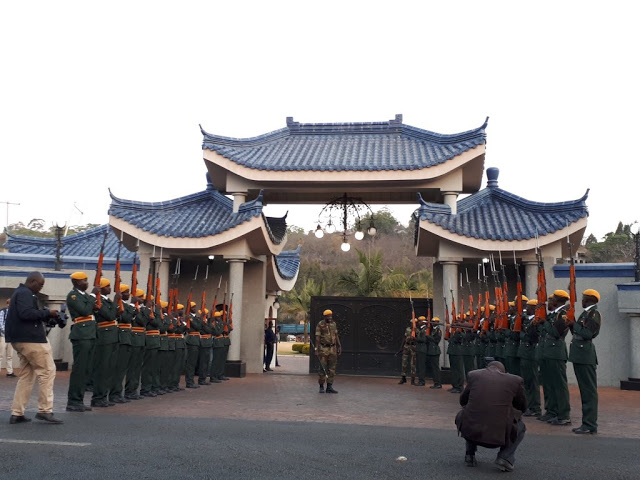 He once described himself as one of the poorest political leaders in the world with a meagre salary and meagre benefits however, it can be now revealed that Robert Mugabe has left his wife and children a 2 billion dollar (USD) legacy that includes hundreds of real estate holdings including houses in Sandton, Camps bay and Clifton in South Africa as well as property further afield including property purchases in Malaysia, Singapore, Dubai as well as castles in Scotland. Hundreds of millions of dollars in cash in secret accounts in Switzerland, the Channel Islands and the Bahamas are also part of the legacy.. There are reports that even more wealth is tied up in frozen bank accounts in countries that Robert Mugabe was banned from due to human rights violations.

In Zimbabwe. Robert Mugabe has left a legacy of properties including several businesses which include diamond and gold mining operations, various building stands, at least fourteen farms including the Omega Dairy farm, one of the largest dairy farms in southern Africa. One former minister who refused to be named said “It is astounding how much wealth Robert Mugabe has amassed for himself especially coming from what is now one of the poorest countries in the world. There is no way a former president of any country can die a billionaire unless he has either been successful as a business man or looted the country’s finances.” Robert Mugabe was known for holding legendary parties and events that would make make even the most wealthy royalty feel inadequate. His birthday parties and his daughters wedding were opulent events which saw guests dining on delicacies such as caviar, foie gras and baby elephant whilst his country suffered both an unemployment rate of 98% and an average life span of 30. Many political analysts feel that Robert Mugabe was an anapologetic dictator who made no excuses for his numerous human rights violations including a genocide called Gukurahundi which is a Shona language word for the whirlwind that washes away the chaff which saw tens of thousands of people called the Ndebele from Southern Zimbabwe, murdered, tortured and raped. It is also well documented that Robert Mugabe had a deep disliking of any political rivals and many of the people who spoke against him, were in his way or tried to usurp him over the years were quickly and quietly eliminated. Many believe that Mugabes first assassination was that of Josiah Tongogara who many believed alongside Joshua Nkomo would have been Zimbabwe’s first leader.

Robert Mugabes former lieutenants including current president Emmerson Mnangagwa are also very wealthy people. Emmerson Mnangagwa who is also a billionaire enjoys a lavish lifestyle of fine dining and luxury jet travel that would make leaders from countries such as the U.K, France and Germany green with Envy. Only President Donald Trump and Kim Jong Un of North Korea travel better. With Zimbabwe falling deeper and deeper into both financial and political depression, President Mnangagwa continues Mugabes opulent lifestyle and human rights violations but this time it is cloaked in the words democracy, peace and freedom of speech. Like Mugabe. Mnangagwa was also involved in the genocide called Gukurahundi. Mnangagwas political rivals and critics also quickly and quietly disappear in the middle of the night or are kidnapped from their homes, tortured then left for dead in ditches or at roadsides with the president claiming to not know anything about him. Many political analyst say that Mnangagwa has the same demeanor as Idi Amin. Former leader and dictator if Uganda.

Mugabes other former leuitenants including Professor Jonathan Moyo, Perence Shiri, Obert Mpofu and Constantino Chiwenga are also multimillionaires in their own rights. There are numerous others. Mugabe’s former political party Zanu Pf enjoys a large amount of membership applications from people all wishing to be part of it in the hopes that they like former leaders can become millionaires too. Political analysts continue to marvel at how Zimbabwe can have so many political leaders who are multi millionaires whilst the countries citizens are dying of starvation with no access to medicine as well as having to endure 18 hour power cuts and water shortages. As the saying goes the apple does not fall far from the tree and if matching Mugabe’s legacy of ruling with an iron fist, numerous deaths, stealing wealth and dictatorship is something to be achieved, Robert Mugabes should be very proud of the footsteps that Emmerson Mnangagwa has followed him in. Robert Gabriel Mugabe. Dead at 95 – Independent News