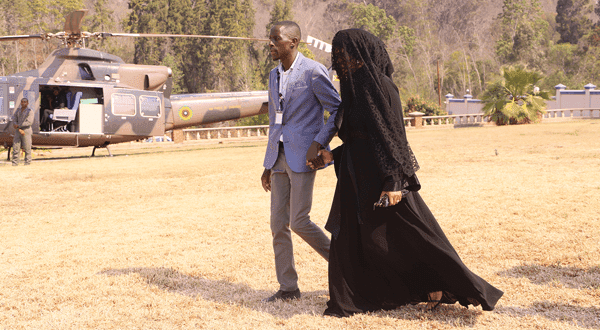 Former Zimbabwean First Lady, Grace Mugabe, failed to attend a traditional court in Mashonaland West province, where she was expected to face charges of violating local norms in laying to rest the country’s late president, Robert Mugabe, who was toppled in a defacto military coup in 2017.

Mrs. Mugabe was summoned by Chief Zvimba to answer allegations that she buried the late former president at the family homestead in Zvimba instead of a designated place in line with traditional norms.

Mrs. Mugabe could not be reached for comment with some close family members indicating that she is in receiving treatment for an undisclosed ailment in Singapore where her husband succumbed to cancer.

Patrick Zhuwao, Mrs. Mugabe’s nephew, recently told a South African broadcasting station that her aunt is undergoing treatment in Singapore. He did not elaborate.

More than 20 policemen, said to be attached to various units in Harare and Chinhoyi, prevented journalists on Thursday from attending Mrs. Mugabe’s case at the Chiefs Court in Murombedzi Growth Point. Chief Zvimba was unreachable for comment.

One of Mugabe’s relatives, Dominic Matibiri, blasted Chief Zvimba for summoning his daughter-in-law to a traditional court when he was among people who did not object to the late president’s burial at his homestead instead of a family gravesite in Zvimba communal lands where his mother and other relatives were laid to rest.

Matibiri said, “It was not Grace (Mugabe) that decided where Mugabe should be buried. It was a collective family decision and besides Chief Zvimba cannot summon Grace today because he was part of the family that presided over Mugabe’s burial as a close relative.”

In a letter dated April 29, 2021, and signed by the traditional leader, Chief Zvimba ordered Mrs. Mugabe to attend the village court on Thursday at Gonzo Guzha Hall in Murombedzi Growth Point.

“All properties of the late Robert Gabriel Mugabe are supposed to be kept at his homestead and handled in line with our traditions. I want you to rebury the late president in accordance with our traditions and in Zvimba at a place designated by the family and his late mother. These charges you are facing attract a fine of five cattle and a goat.”

In the letter, Chief Zvimba had noted that Mrs. Mugabe was allowed to bring witnesses. “We will proceed with the case and make an appropriate ruling if you don’t attend the village court without seeking permission.”

Mrs. Mugabe was asked to fix a date with appropriate authorities if she won’t attend the village court.

The former first lady’s nephew, Leo Mugabe, was unreachable for comment on his mobile phone. Leo Mugabe was quoted by an online publication recently as saying he was not aware of any moves by Chief Zvimba to summon Mrs. Mugabe to the village court to face charges of breaking traditional rules and regulations of burying people in his area.

According to independent economists, the Mugabe family has business interest worth more than US$10 million.

Zimbabwe joins U.N. ‘Wall of Shame’ as it votes against resolution to stop genocide