THE University of Zimbabwe (UZ) was yesterday forced to suspend examinations mid-stream after students demonstrated demanding that vice-chancellor Levi Nyagura explain the circumstances under which First Lady Grace Mugabe obtained her doctor of philosophy (PhD) degree three years ago. 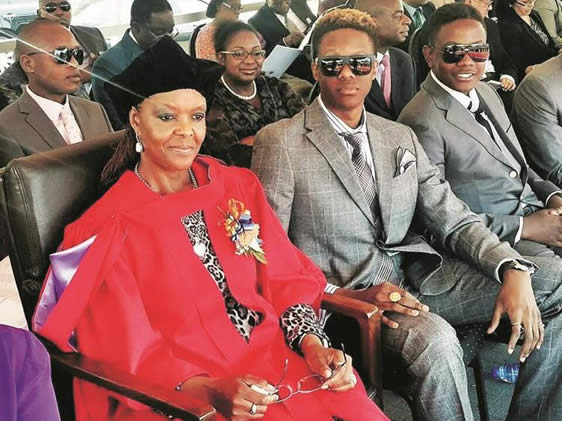 The institution came under intense criticism following Grace’s graduation in 2014 amid claims that the university had been coerced to award her the degree by President Robert Mugabe. The university has kept her thesis a closely-guarded secret.

The revolt by the students came just a day after the ruling Zanu PF recalled Mugabe and expelled his wife from the party.

In a notice to students, authorities said the examinations had been deferred to the period January 8 to 24, 2018.

Grace was awarded a PhD in sociology three months after enrolment in what critics said was a “jealousy” move to equal then Vice-President Joice Mujuru who was also capped at the same time with her.

Yesterday, the UZ reportedly threatened to engage the Zimbabwe Defence Forces as invigilators for the suspended examinations as students vowed that they would only resume after Mugabe has resigned as chancellor of the university.

UZ Student Representative Council (SRC) president Tawanda Vhudzijena told journalists that the institution had given them two options, to write the examinations under the watchful eye of the military or defer everything to next year.

“We met with the university administration and we have been given two options, which are to write the exams under the supervision of the military or have them deferred to next year, but our position is firm, that until President Mugabe steps down, we will not write examinations, “ Vhudzijena said.

Mugabe, in power since majority rule from Britain 37 years ago, has found his grip on power slipping away after the military took charge last week to “pacify a degenerating political situation”.

Vhudzijena applauded the military action that has left Mugabe, Grace and some of his top aides under house arrest while others have been detained in barracks.