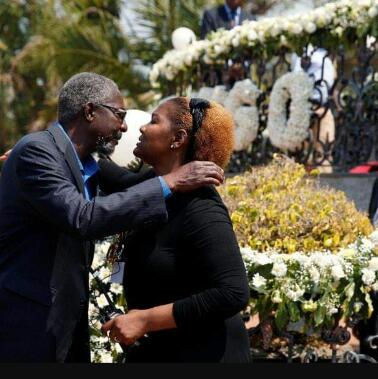 The late former President Robert Mugabe’s nephew Leo Mugabe whose cattle were used to pay lobola for his second wife, Grace, in Chivhu in 1992, four years after they had Bona while his first wife Sally was still alive is set to inherit Grace Mugabe as per Zezuru traditions and customs.

Leo Mugabe was the spokesperson for the Gushungo family when Robert died and he is the son of Sabina Mugabe.

This week Mugabe’s estate was declared and in line with Zezuru customs, if there is no surviving brother to the deceased, the eldest nephew will inherit the wife.
The traditional practice of wife inheritance or “kugara nhaka,” calls for the wife of a deceased man to be inherited by the man’s male relative, usually his brother.

With regard to wife inheritance, the United Nations (UN) Integrated Regional Information Networks (IRIN) reported in November 2004 that under customary law, “[a] young widow… who refused to be physically ‘inherited’ by a male relative of [her] late husband, often a brother,” would likely be expelled from the home she had shared with her deceased spouse .

Mugabe’s nephew Leo said in October the late former president later refused to reimburse the cattle after stating that Leo’s father had not fully paid lobola for Mugabe’s sister (Sabina).

I was accompanied by my late brother Innocent. Sekuru told me to use my cattle to pay the lobola, with the promise that he would replace them.

Later, sekuru declined to replace my cattle, arguing that my father had not paid lobola fully when he married our mother. Still, I was happy for sekuru when he married Mbuya Grace, as he wanted children.

The late former president once revealed that the reason he got involved with Grace while Sally was still alive was because he wanted children badly and his first wife was struggling with fertility issues.

“If Grace decides not to Marry Leo, she can opt for one of her sons to fulfil the tradition but in this case Leo has already paid Lobola”, said Mugabe’s relative who spoke on condition his name is not published