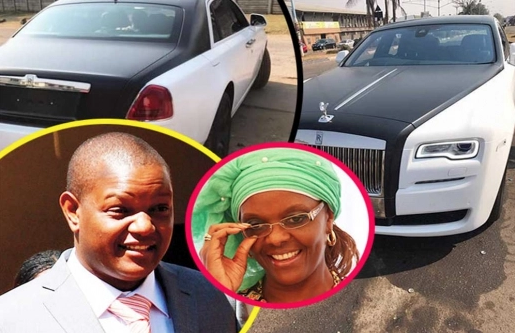 A South African student is reportedly crying foul after she was impregnated by former Zimbabwean first lady Grace Mugabe’s son, Russell Goreraza, 33, before he turned his back on her.

The state-owned Herald newspaper reported on Friday that, Goreraza, who is Grace’s son from her first marriage to Stanley Goreraza, allegedly fell in love with Dineo Gwendoline Kekana, 22, in 2016.

Kekana then fell pregnant in July and when she broke the news to Goreraza, he started “playing hide-and-seek games” and was no longer responding to her calls.

“My name is Dineo Kekana, I am South African. I am pregnant with Russell Goreraza’s child. We started seeing each other in December last year, 2016. I fell pregnant in July this year,” Kekana was quoted as saying.

She said that at one-point Goreraza advised her to abort the pregnancy “since he could not be held accountable by virtue of being a foreigner”.

A New Zimbabwe.com report said that Kekana was “distraught” as Goreraza did not want to hear from her and apparently boasted that he was “untouchable” as he “doesn’t live in South Africa, isn’t a citizen and might actually never return [to South Africa]”.

Reports indicated that Goreraza was already embroiled in a divorce case at the Zimbabwean High Court with Gladys Goreraza (nee Chiwaya), whom he wedded seven years ago and they had a child.

According to court papers, both parties had consented to the divorce which came almost two years after Russell approached the High Court seeking a divorce order, a NewsDay report said in November.

Goreraza claimed that he and Gladys had irreconcilable differences and were incompatible with each other to the extent that they had not lived as husband and wife for the past two years. News24.com