Half of Zimbabweans fell into extreme poverty during Covid 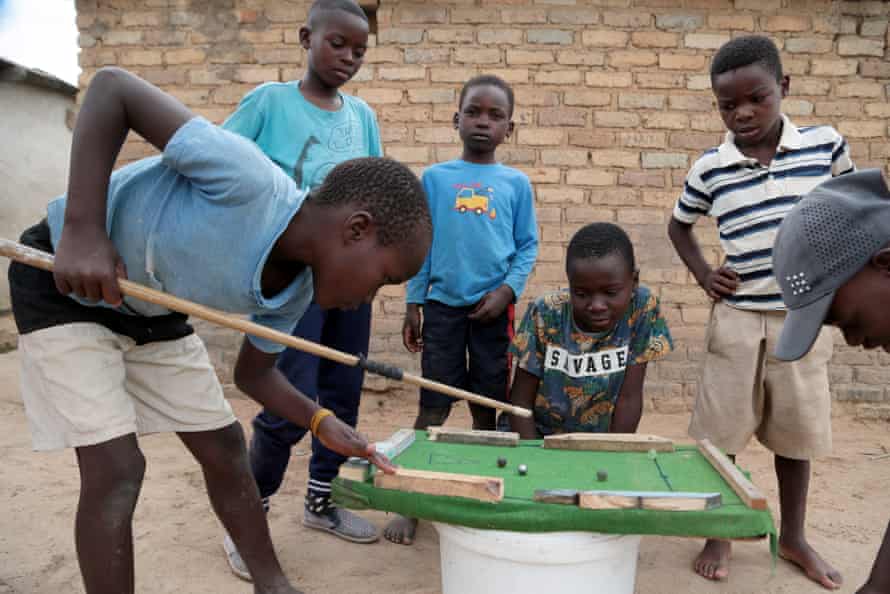 Poor families cannot afford healthcare and schooling but good harvests offer some hope, World Bank finds
Children play at a borehole in the township of Mbare, Harare, Zimbabwe
Children play at a borehole in Mbare township, Harare. Aid agencies are recording high levels of malnutrition and stunted growth in Zimbabwe. Photograph: Aaron Ufumeli/EPA
The number of Zimbabweans in extreme poverty has reached 7.9 million as the pandemic has delivered another economic shock to the country.

According to the World Bank’s economic and social update report, almost half of Zimbabwe’s population fell into extreme poverty between 2011 and last year, with children bearing the brunt of the misery.

“The number of extreme poor is expected to remain at 7.9 million in 2021 amid continued elevated prices, and a slow recovery of jobs and wages in the formal and informal sectors,” according to the report.

“Given limited social safety nets for protecting the high numbers of poor, households are likely to turn to negative coping strategies,” it said.

“Poor households are likely to forgo formal health care as they are unable to pay for services, and to keep children out school to avoid education costs, such as for school fees, uniforms and textbooks.”

The pandemic added 1.3 million Zimbabweans to the numbers of extreme poor as jobs and income were lost in urban areas.

According to the World Bank, the “extreme poor” are defined as people living under the food poverty line of US$29.80 (£21) for each person a month.

Those living below this threshold doubled from 3 million in 2011 to 6.6 million in 2019, with higher numbers than ever recorded in rural areas.

Child poverty has risen exponentially around the country and humanitarian agencies are recording high levels of malnutrition and stunted growth.

Children play on a makeshift pool table, Hopley, Harare
Boys play on an improvised pool table in Hopley, outside Harare. As the Covid lockdown closed schools, poorer children were left to their own devices. Photograph: Aaron Ufumeli/EPA
Rising prices for fuel and food have hit the poor, with increases for maize and maize meal alone estimated to have boosted extreme poverty by two percentage points between May and December 2019.

“According to the survey, in July 2020 nearly 500,000 households had one member who had lost her or his job since the onset of the pandemic, worsening the plight of the poor and forcing more households into intermittent or prolonged suffering. The most common stated reason for losing a job in urban areas was business closure due to the lockdown,” the report said.

While wages dropped, 23% of the poorest people – who were working before Covid-19 – had lost their jobs by June 2020, adding thousands to the unemployment numbers.

“Among the non-poor, this figure was also high at 20%. As fewer of the poor were working even before the pandemic, the proportion of households affected by job losses is about the same for both the poor and the non-poor,” the report said.

A stallholder with a tattered $20 note at a busy market in Harare. The continuing economic crisis means enterprising traders are repairing old notes for desperate customers. Photograph: Tsvangirayi Mukwazhi/AP
The grim reading of Zimbabwe’s economic prospects comes as the government boasts of a budget surplus of $9.8bn (US$19.5m), maintaining that the economy has grown under the leadership of President Emmerson Mnangagwa, but the reality on the streets of Harare tells a different story of struggle as families scrape a living.

However, despite uncertainty over a third wave of Covid, the bank suggested that Zimbabwe could have an economic rebound in 2022 with a bumper harvest expected to ensure most rural families have enough to eat and leading the economy to 3.9% growth.