Harare City council has defended its decision to charge FBC Bank a low rental fee saying its only for a borehole site, Mayor Ben Manyenyeni has said.

Manyenyeni was called to clarify on social media Facebook after Gift Mawire posted an advert by HCC that caused outrage on Thursday. 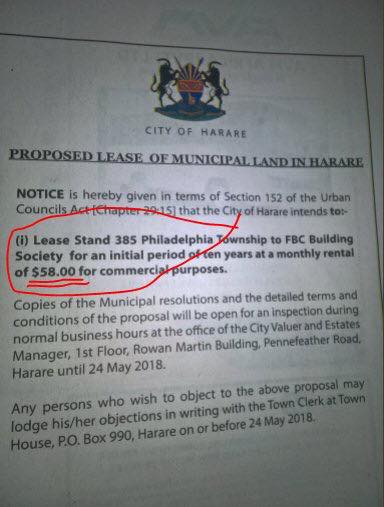 “There has been social media hyperactivity around the seemingly low pricing of $58 per month for a “lease” to FBC a banking group by the Harare City Council.

That “land” being leased to FBC is a just a borehole site. It measures only 25sq.m.

The banking group has drilled a borehole to provide water to the flats which they built close to that site.

It is unfortunate the advert provided neither size nor specific use of the leased land. Indeed this justified eyebrows being raised.