headless chicken has survived a WEEK since being decapitated – and is being fed by its adopted owner to keep it ‘alive’. 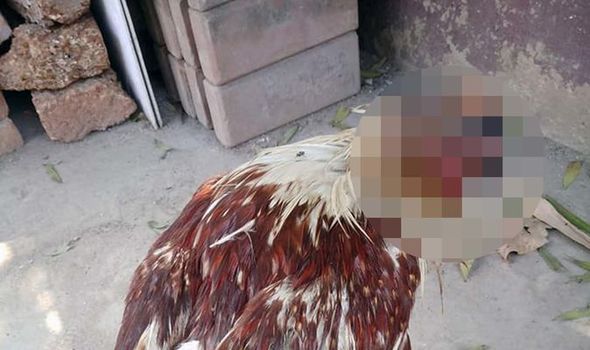 Bizarre footage shows the chicken still standing despite only having a bloodied stump where its head used to be.

It is not known how the unfortunate bird lost its head, but it has now been adopted by a vet who is feeding it by dropping food and antibiotics down its neck.

Supakadee Arun Thong, who lives in central Thailand, said the animal is tame and is feeding well despite its ordeal.

“The animal has its life. If it wants to live, we feed it,” she said.

She is now hoping someone will take it off her hands.

“Who will take him and care for him? He will need lifelong care. I have to admit that this chicken is a true warrior with a very tough heart.”

The bird still has a long way to go before beating the record for the longest period a chicken has remained standing after decapitation.

A chicken named Mike hit the headlines after it survived for 18 months without a head between 1945 and 1947.

Scientists believe the positioning of a chicken’s head away from the front of its skull could be one of the reasons why Mike survived for so long.

Dr Tom Smulders told the BBC he believed that up to 80% of Mike’s brain — including the part that controls heart rate, breathing and hunger — remained untouched by his decapitation.

“You’d be amazed how little brain there is in the front of the head of a chicken,” Dr Smulders said.

Mike eventually suffocated when mucus got stuck in his throat.

His owners, Lloyd and Clara Olsen, would usually help Mike by clearing the mucus with a syringe, but they were woken in the night by the sound of Mike choking and were too late to help. — Daily Mail