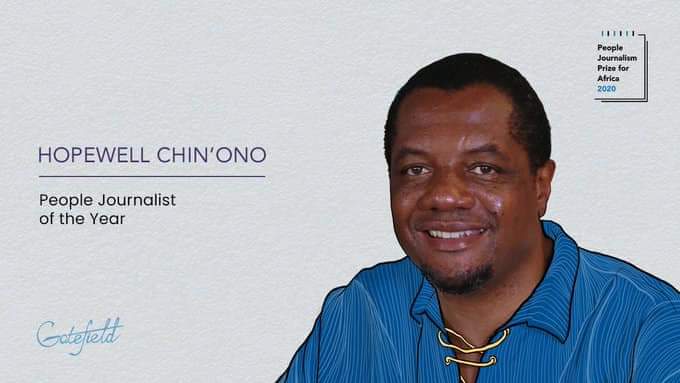 In its second year, the PJPA 2020 comes with a $3,000 reward for the selected journalists and $15,000 worth of strategic communications support to FemCo from Gatefield.

Zimbabwean journalist Hopewell Chin’ono is the People Journalist for Africa 2020. We selected Hopewell for his investigative reporting on the COVID-19 procurement corruption in Zimbabwe. This report stopped this corrupt activity and forced the sack of the country’s health minister.

David Hundeyin is the People Journalist for Informed Commentary 2020. We selected David for his exposé on the draconian Infectious Diseases Bill under consideration by Nigeria’s House of Representatives during the COVID-19 lockdown. This report led to the withdrawal of this proposed legislation, which would have imperilled Nigerians’ fundamental human rights.

The Feminist Coalition are the winners of the People Newsmaker for Social Justice Award. We selected FemCo for their exceptional leadership that rallied an unprecedented nationwide and global response against the injustice of police brutality in Nigeria.

PJPA is a public service journalism initiative to recognise and reward journalists, citizen reporters, and social justice newsmakers in Africa. A public presentation of the award will hold in May 2021 in a yet to be decided format.

Hopewell Chin’ono is a documentary filmmaker and international journalist with several years of experience in print and broadcast journalism. He was formerly at the BBC before returning to Zimbabwe to make his award-winning documentary “Pain in My Heart” which won the 2008 CNN African Journalist of the year award. He has received several awards and fellowships including the 2008 Archbishop Desmond Tutu Leadership Award and the Kaiser Family Foundation Award for Excellence in HIV/AIDS Reporting in Africa, the Tutu Fellowship in African Leadership award for Oxford Business school, and the Nieman Fellowship.

David Hundeyin is an international journalist with affiliations such as CNN Africa, Africa Report, Business Day, and TheScoopNG. David is a reporter for NewsWire Nigeria, where he made the groundbreaking report on the infectious disease bill. David’s work has helped bring other important stories to light and influence positive social outcomes.