I turned down ‘an affair’ with Khupe – Job Sikhala 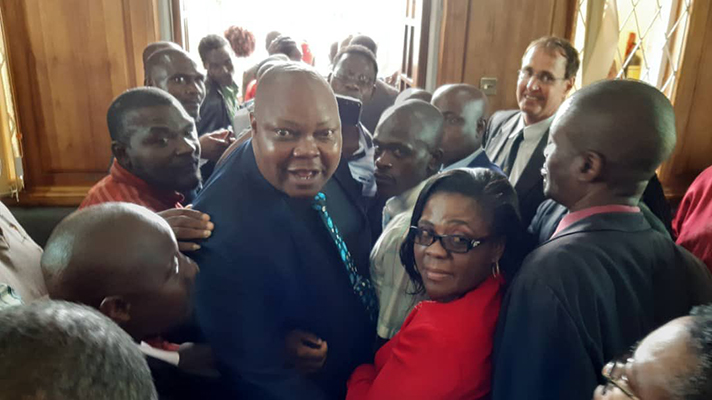 MDC Alliance vice-chairman Job Sikhala has claimed that several approaches were made by people from the Thokozani Khupe led MDC-T for him to join and become their president, but the Zengeza West MP turned down the offer because he did not want to betray the will of the people.

On Thursday, Sikhala rebuked Khupe’s spokesman Khalipani Phugeni for ‘lying’ that the MDC Alliance vice-chairman was intending to join the MDC-T.

Sikhala who was recently arrested and charged with allegations of inciting violence in connection with the 31st July protests against corruption said his loyalty was to the people of Zimbabwe.

“What I am told is that he claimed that I have joined them. It must be on record that for many many years I never met this Khalipani Phugeni since he stopped attending MDC T meetings which I was a National Executive member as the Secretary for Recruitment and Mobilisation during the period of the late President Morgan Tsvangirai. He abruptly stopped attending MDC meetings after the appointment of VaMudzuri and VaChamisa as Vice Presidents of the party.

“I coincidentally bumped into him at Holiday Inn Hotel soon after the 2018 elections where he told me that he had come for the launch of POLAD.

“He was seated on top of his bag right on the entrance to the Hotel. I greeted him and had a few minutes chat where he told me that he is in Harare from SA for the launch of POLAD.

“This man is astonishingly brave. But he must be told beforehand that respect is very important. Don’t talk about other people who have never talked about you without their consent. It is not only dangerous but borders on contempt of others,” Sikhala said.

“What he must know is that I am rooted in the people. Millions from the Zambezi to Limpopo, from Forbes Border to Victoria Falls, and beyond our borders have a strong belief in my fight for the emancipation of the Zimbabwean masses.

“Every politician must be rooted in the people. It must be people-centered not personal interest. What I know is that several approaches were made by many people from Phugeni’s side for me to go and become their President.

“Several times I told them I am not inspired by positions in a struggle. Relevance to a struggle is not shaped by someone’s position in society but by the character of an individual. Positions are sources of false importance and I am a Che Guevara who just wants Zimbabwe to be free from the evils of the ZANU PF regime.

“In addition, they have got several choices and options in VaMudzuri, VaKomichi, Mama Khupe naVaMwonzora. My loyalty is to the people of Zimbabwe and my focus is on leading a revolution to liberate our country. I am a freedom fighter and a revolutionary. To amplify my position, I have got a few questions for Mr. Khalipani Phugeni.”

Sikhala is the 31st July movement spokesperson. The movement came into existence soon after the 31 July demonstrations against corruption that were convened by then incarcerated opposition Transform Zimbabwe leader Jacob Ngarivhume.

But Ngarivhume was arrested together with investigative journalist Hopewell Chin’ono who recently exposed President Emmerson Mnangagwa in a massive corruption scandal involving his wife Auxillia and his son Collins, in the Drax Covidgate scandal.

Chin’ono and Ngarivhume were all released from Chikurubi Maximum Security Prison after 45 days of incarceration. Sikhala was released after five weeks in the country’s biggest and notorious jail.

Against the allegations he regarded as ‘false’ Sikhala asked the MDC-T the following ten questions:

1) Are we of the same ideological inclination that we all believe that Emmerson Mnangagwa and ZANU PF are the evil sources of all the suffering the people of Zimbabwe are going through?

2) If so why then have I never heard you in one trance or sentence attacking the misgovernance which Emmerson Mnangagwa and ZANU PF have perpetrated in our country?

3) Is the current bloodletting in our party our own making or caused by Emmerson Mnangagwa? So why are you inviting me to a Mnangagwa sideshow?

4) When are you going to pronounce the truth that all our problems originate from the doorsteps of Emmerson Mnangagwa and ZANU PF?

5) If you genuinely love me so much, I was recently in prison incarcerated for no crime at all but an expression of the suffering of the masses, have you ever posed and decided to issue a statement either condemning my persecution or a mere statement of solidarity or just phoning my family to empathize with me?

6) What is your take on our persecution together with Hopewell Chin’ono and Jacob Ngarivhume over the 31st July National lockdown? Have you pronounced yourself on that?

7) Do you agree with me that people are the ultimate source of power for any government in the world?

8) If so why don’t you join me in mobilising citizens in the expression of their anger against the misgovernance in our country?

9) What is your take over issues of abductions, torture, and human rights abuses that are intensified in our country at the moment? Why are you not pronouncing yourself on this critical and crucial subject of the moment?

10) Do you believe that these fights will only prolong the suffering of the masses of Zimbabwe? If so do you see the importance of unity of purpose to deal with the ZANU PF evil!? Are you speaking the language of unity or polarization? I urge you to look yourself in the glass and reflect on all questions I ask you. Nehanda Radio

Mentally ill Joana Mamombe to be removed as MP