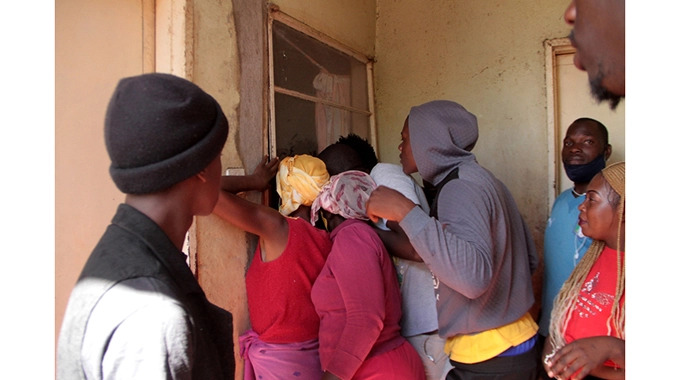 A jackal seen roaming the streets in Seke Unit A, Chitungwiza, early yesterday morning fled into a house when early risers started pelting it with stones.

A Zimbabwe Parks and Wildlife Management Authority (ZimParks) team eventually shot dead the jackal after they failed to capture the wild animal.

The jackal was seen in the morning by people going about their chores in Unit A and they quickly started chasing it and throwing stones.

It ran into a nearby house, and a large crowd gathered to try and see it.

The householder quickly phoned ZimParks and a team was sent to the area.

Chitugwiza Unit A resident, Mr Alfonse Mataruse (wearing a red cap) helps a ZimParks official carry and put into the car the carcass of a jackal killed in the town yesterday.

“The timid animal then sought refuge in one of our rooms after one of our tenants left the door to his bedroom open. It hid under a bed and I went to investigate only to establish it was an unusual animal. It was quite timid obviously because of the noise and the attack it had been subjected to by members of the public,” said Mr Mutengi.

He locked the door and contacted Zimparks.

“They asked me to verify if indeed it was a jackal and told them it was. They then advised me to lock the door and wait for them. When they came here they tried to capture it but could not do so because they did not have a cage. One other problem was that they could not open fire given the crowd that had swelled and they decided to call the police so that they could control people while they deal with it,” said Mr Mutengi.

“They then went to get some police officers who managed to contain the crowd while they captured it. They shot it rather than attempting to capture it.”

Another resident, Mrs Veronica Mugutso said she was part of the crowd that chased the animal.

Chitugwiza Unit A resident, Mr Alfonse Mataruse (wearing a red cap) helps a ZimParks official carry and put into the car the carcass of a jackal killed in the town yesterday.

“What is strange is how the animal got into the middle of residential area given that the nearest bushy area is near Chikwanha business centre which is about 5km away,” she said.

ZimParks spokesperson, Mr Tinashe Farawo said the shooting was routine. “We received reports and we responded. We treated it as one of the problem animal that is causing discomfort to human life. Our officers shot it and took it away. It is part of the wildlife and human conflict that we have to deal with,” said Mr Farawo.

However, Mr Mutengi felt that the incident cast a bad spell at their residence and when The Herald left the place he was busy administering some traditional muti to cast the bad spell associated with the coming of the animal.

“I was advised by neighbours that it could be a bad spell and am now using coarse salt and water as part of efforts to cast the bad spell that could be associated with the jackal,” he said.

It is likely that the jackal will be tested for rabies infection.

Three VID officials up for corruption