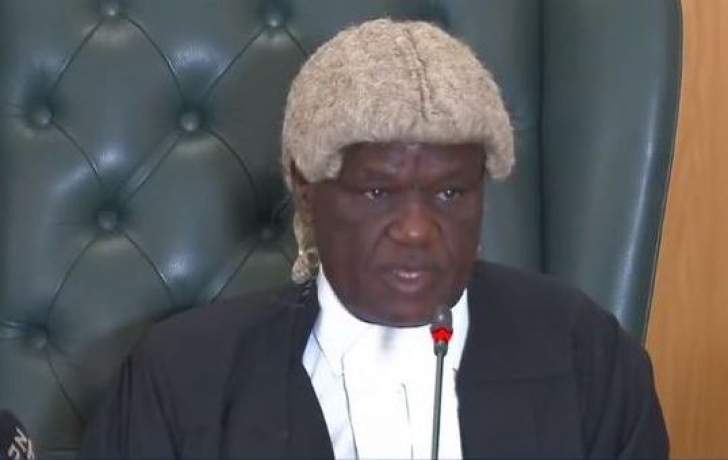 CHIEF Justice Luke Malaba’s bid to extend his tenure as Zimbabwe’s top judicial officer may have suffered a blow after the High Court directed Senate to vote for a Constitutional Amendment Bill which will determine his fate after his term lapses, The NewsHawks has established.

Malaba — who by operation of law retires at midnight on 15 May 2021 when he turns 70 — is trying to extend his stay in office by another five years renewable annually.

The Senate now has a new deadline of Wednesday 26th May to comply with paragraph (b) of the March 2020 order as extended by the 25 February order:
“The Senate is directed to conduct a vote in accordance with the procedure for amending the Constitution prescribed by section 328(5) of the Constitution within 90 days of 25th February 2021, failing which the declaration of invalidity of Constitutional Amendment Bill [sic] (No. 1) of 2017 in paragraph (1) shall become final.”

However, his audacious bid to extend his reign at the apex of the judiciary will be arduous. There are too many impediments along the way.

Law scholars and practitioners who spoke to The NewsHawks said Malaba faces all these obstacles which must be overcome if he is to stay in office until he is 75.

Last April, the Constitutional Court ruled that Constitutional Amendment No 1 of 2017, which sought to give President Emmerson Mnangagwa more powers in the appointment of the Chief Justice, his deputy and the Judge President in consultation with the Judicial Service Commission, was unconstitutional.

Zimbabwe made its first amendment to the constitution adopted by an overwhelming popular vote in 2013 through an Act published in an Extraordinary Government Gazette of 7 September 2017 to commence with immediate effect.

But MDC lawmaker Innocent Gonese and then MP for Harare West Jessie Majome filed a constitutional application seeking the nullification of the parliamentary proceedings that led to the passing of the Constitutional Amendment Bill (No. 1) into an Act.

They argued that when the process was done, the National Assembly and the Senate were not fully constituted.

Justice Paddington Garwe upheld Gonese and Majome’s application, setting aside the amendment on the grounds that a two-thirds majority or quorum was not fulfilled in Senate when the proceedings were conducted.

“It is decided that the passing of the Constitutional Amendment Bill No 1 of 2017 by the Senate on
August 1, 2017 was inconsistent with the provisions of s328(5) of the constitution, to the extent that the affirmative votes did not reach the minimum threshold of two-thirds of the membership of the House,” Justice Garwe ruled.

“Constitutional Amendment Bill (No 1) of 2017 is declared invalid to the extent of the inconsistency. The declaration of invalidity shall have effect from the date of this order, but is suspended for a period of one hundred and eighty-eight days, subject to the provisions of paragraph 1(b).

“The court directed Senate to conduct a vote in accordance with the procedure for amending the Constitution prescribed by s328(5) of the Constitution within 188 days of this order, failing which the declaration of invalidity of Constitutional Amendment Bill (No 1) of 2017 in paragraph (1) shall become final.”

Following the lapse of the 180 days, an application was made to the Constitutional Court to allow the process to resume.-Newshawks

Panashe Muzambe: From childhood in Zimbabwe to the Scotland rugby team