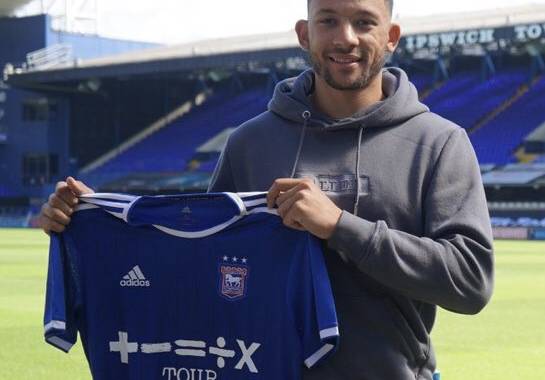 The 25-year-old is moving to the League One side – a competition lower – on a season-long loan.

Bonne signed for QPR last October, joining from Charlton Athletic – a move that was seen as a huge step in his career.

He went on to make nine starts and rose 26 times from the bench in all competitions in his debut season – scoring three goals.

Bonne, who featured for the Zimbabwe under-23 side in a friendly match against a full-strength Morocco senior in 2014., is now relishing the chance to get regular action.

He is retracing his roots, as he was part of the Town Academy up until U14 level.

“It’s been 12 years since I left here when I was a kid and it’s great to be back.

“I’m a Town fan and as soon as I heard about the opportunity to come back here and play for the first-team, the team that I essentially love, it was a no-brainer. I can’t wait to get going now.

“Paul Cook (Town coach) is a character. He’s been dying to get it over the line. He seems like a guy I really want to work with and do well under, and it seems like he wants the same for me so that’s all I can ask for,” Bonne told the club website.

Related Stories:
Bonne scored his debut goal for Zimbabwe in the match against Morocco, which they lost 2-1, went to feature in other friendlies in 2017.

He, however, on a number of occasions, snubbed opportunities to represent Zimbabwe at competitive level.

This is despite the fact that he now possesses a Zimbabwean passport which makes him eligible to play.

He is believed to be among the players Warriors coach Zdravko Logarusic said lacks commitment to represent the country.

At club level, Ipswich-born Bonne left Ipswich Town as a youth, had a brief spell at Norwich, before joining Colchester.

He made his professional debut for Colchester in October 2013 and stayed there until 2017, when he completed a switch to Leyton Orient.

In his two seasons at Orient, Bonne scored 45 goals in 90 League games – a form that earned him a move to Charlton.

He continued with his impressive scoring form – banging 11 goals in 36 League games in the Championship before heading to QPR in October 2020.